In my youth 11 November was touted as Armistice Day here in the States.  I still call it that in deference to my grandfather and great uncle.  I never understood why Ike changed it to Veterans Day.  We already honored veterans on Memorial Day and on Armed Forces Day.  Why have another?  Don’t bother to answer, I was only asking old Ike a rhetorical question.  Since World War One was touted as the ”War to end all wars”, then IMHO Armistice Day was honoring the stopping of war, any war; honoring ceasefires regardless of where or when; honoring a truce no matter how short; honoring peace.  The Veterans for Peace organization still honors Armistice Day as “a day to be dedicated to the cause of world peace and to be thereafter celebrated." 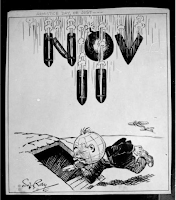 But unfortunately war never stopped on 11 November 1918.  In the period just after the 1918 Armistice there were at least 27 violent transfers of political power, many accompanied by violent civil wars.  Not just in Russia.  Winston Churchill in his arrogance commented sarcastically: "The war of giants has ended, the wars of the pygmies begin."  Yet Europe between Armistice Day in November of 1918 and the Treaty of Lausanne July 1923 was the most violent place on the planet.  Four million people died during that period as a result of armed conflict.  Millions more died of the great influenza pandemic between 1918 and 1920, much of it had been spread by war.   And hundreds of thousands died of starvation due to those post-Armistice conflicts.

There was the Greco Turkish War and the Polish Soviet War.

The Aster Revolution broke out in Budapest.  Then Romanians and Czechs invaded Hungary; and also in Hungary there were periods of both Red Terror and White Terror.

Yugoslavia sparred with Italy over Rijeka.  Poland did the same with Czechoslovakia over Cieszyn Silesia, and with Germany over Poznań, and with Ukrainians over Eastern Galicia.

There was the violent rise and fall of the Bavarian Soviet Republic in Munich, and the Spartacist Uprising in Berlin.  The Freikorps also fought against the communists in the Baltics, Silesia, Poland and East Prussia.

Ditto for an attempted Communist putsch in Vienna.  And ditto for the Slovak Soviet Republic in Prešov.

Immediately after the Irish War of Independence, there followed a bloody Civil War.

The last Sultan, Mehmed VI, was overthrown in Turkey.  And Turks fought their own War of Independence against France, Italy, Britain, Armenia and Greece.

There was the well-known Russian Civil War between Reds and Whites with various interventions by French, British, Australian, Italian, Canadian & US troops in Arkhangelsk; British, Canadian, Italian, Chinese, Japanese & US troops in Vladivostok; Romanian troops in Bessarabia; Greek troops in the Crimea and Odessa and Kherson; Estonian troops in northwestern Russia; and the Czech Legion throughout Siberia.  Plus Russia repressed breakaway republics in the Caucasus and the western borderlands, and the kulaks, anarchists and moderate socialists.  Ukrainians, Belarusians, Lithuanians, Estonians and Latvians fought against each other and against the Russians.

In Bulgaria there was the coup against Prime Minister Stamboliyski by IMRO.  His hand that signed the Treaty of Niš was cut off.  Then he was blinded, tortured and his head cut off, which sparked bloody uprisings and repression.

I would guess I missed many more of the conflicts during that period.  And the above mostly speaks of Europe.  There was also much bloodshed in Africa, Asia and the Americas during that timeframe to include the Rif War in North Africa, the revolt in Egypt, the Amritsar massacre (and others) in India, the March 1st Movement in Korea, the Warlord Era in China; the continuation of the Mexican Revolution, and many more.  FDChief is correct: the hairless ape has never figured out a way to solve problems without violence.
Posted by mike at 8:00 PM