Cancellation?  Oops, there goes the Peace Prize.  The chickenhawk war consigliere Bolton appears to have triumphed.    South Korea seems blindsided that the meeting was cancelled right after Punggye-ri nuclear test site was demolished (IF it was demolished?).


Moon just called an emergency National Security meeting at the Blue House in Seoul - at midnight!!!. Japan looks clairvoyant in their earlier skepticism about this summit.

Some are saying that Kim and company set up Trump to cancel, making Kim look like the adult in the room with Chinese and ROKs both in his corner.   Maybe, but I'm not so sure.   Trump does not need anybody's help in making himself look like a buffoon.


Update 5/24: FDChief here (sorry to horn in, mike, but I couldn't resist...) Fred Kaplan at Slate has a worthwhile take on the "probable-why" the Art of the Dealer called this off:

"In short, Trump is sleepwalking into a potentially historic summit with a determined leader who knows what he has and, more importantly, what he wants—while, until very recently, Trump has shown no awareness that this knowledge is fundamental to diplomacy, to leadership, to making a smart deal.

Maybe Moon will snap Trump out of his torpor when they meet in Washington on Tuesday. Both of them want the summit with Kim to take place and, by some measure, succeed—Moon to reduce tensions and promote peace between North and South Korea, Trump to bolster his self-crafted reputation as a deal-maker extraordinaire. Moon has some idea of how to get to a plausible, if modest, accord; Trump has no idea. The question is whether Trump will acknowledge the disparity and let Moon write the script for the reality show in Singapore. If he doesn’t, he might as well bang on the table and shout, “Fuck you!”

Which Trump now seems to have done, in effect.

To add to the ridiculousness of this tragicomedy, here's the letter Trump wrote to Kim cancelling the summit. It's...bizarre, is perhaps the best description I can come up with. If one of my high school students wrote it in response to a "draft a diplomatic communique" I'd have given him a C-minus.

"I felt a wonderful dialogue was building up between you and me, and ultimately, it is only that dialogue that matters. Some day, I look very much forward to meeting you. In the meantime, I want to thank you for the release of the hostages who are now home with their families. That was a beautiful gesture and was very much appreciated.

If you change your mind having to do with this most important summit, please do not hesitate to call me or write. The world, and North Korea in particular, has lost a great opportunity for lasting peace and great prosperity and wealth. This missed opportunity is a truly sad moment in history."

To me the real tragedy of this is that now we will never be able to have this awesomely majestic challenge coin: 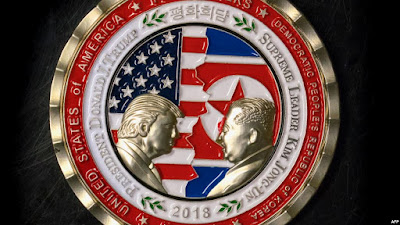 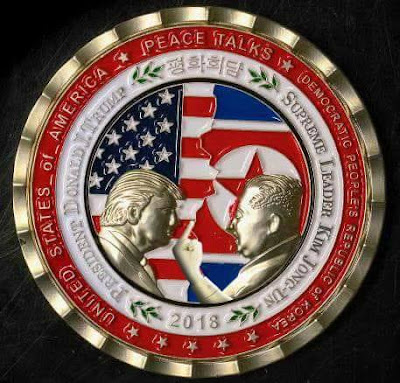 When I can stop and think coldly about all this, there's really nothing to laugh at here. The chief executive of the largest, most heavily armed polity on Earth has been shown to be a poorly-informed, badly-led, credulous, monstrously egotistical, self-deluded fool.
Posted by mike at 8:54 AM