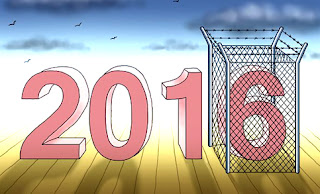 If you make people think they're thinking,
they'll love you,
but if you really make them think,
they'll hate you
--Don Marquis

"Everybody Knows", or "Accidental Terrorist, II":

Whether mass murders are committed by criminals, crazies or crusaders, all activities that can be conducted by terrorists can be predicted and countered; they all throw off indicators. Adequate Human Intelligence (HUMINT) should be keen to these tells, and it seems they are by the speed with which suspects are identified.

The above descriptive categories are not necessarily discrete and do not negate the humanity of the perpetrator, who has merely amplified his innate human qualities and tendencies to pathological levels. They are simply helpful labels to distinguish a potential "them" from an "us".

And yet, though the pathology and criminality can be predicted, detected and monitored, this failed to occur in Boston, Aurora, Newtown, Ft. Hood, University of West Virginia, San Bernadino or any of the other recent spree shootings that occur with sickening regularity. Why?

Why do our authorities not develop a protocol for response, as though each incident is de novo? We are no longer shocked -- only in the disingenuous sense of Casablanca's Captain Renault. What is shocking is our response to these hideous events.

Why didn’t the police barricade and contain the final scenario? Why no effort to capture the killers? If this was an example of terrorism, then capturing the suspects should have been a primary goal, as live intelligence sources are of vital importance.

Why are the identities of attackers with a tie-in to extremist Islam instantly released, yet they were not on anyone’s radar prior to the attacks? Suggestions of police racial profiling are avoided at all costs, yet immediately following these much-too-many attacks, racial profiling is the order of the day. If we know who the murderers are, why do we close the barn door after the horse is out?

Beyond this event, we should be mindful of what our responses hath wrought. Last year the U.S. movie-going public rose in admiration of Clint Eastwood's Hollywood fairy tale, "American Sniper", but to the people on the other side of the fence, neither he nor the country he represents are heroic. In fact, the response to such "heroism" has created the void into which Islamic State was birthed.

James Meek had a good piece recently on the bombing of Syria, in which he outlines the obvious, inevitable failures. As in all recent bombing campaigns, "[First] bombing, then IS franchise."

Bombing fails because it is reminiscent of any colonial approach:

"The country is present, but doesn’t have a voice. ... [A]ir attacks on Syria, before they are an attack on Islamic State, are an attack on Syria, a foreign country, whose citizens have no say in our affairs, and which has not attacked us, or our allies."


It doesn’t make sense for Cameron to argue that air attacks on Raqqa will help prevent IS attacks on London, when the recent attacks in Paris happened 14 months into an intensive series of air raids on and around IS-held areas, led by the world’s leading military power, which has spared no airborne military resources or technology to try to wipe IS from the earth. Russia’s recent experience, losing a passenger jet to an explosive device soon after it began bombing Syria, seems to confirm the intuitive assumption that bombing is more likely to provoke terrorism than to thwart it.

We have been here before, with al-Qaida and then with the Taliban: Western governments have mistaken a super-decentralised network, somewhere between a franchise and an ethos, for an agency with a postal address. The attacks in Paris certainly had IS links – some of the attackers had been to Syria or tried to get there – but most, if not all, were French or Belgian, who sought out IS because they had been radicalised at home, and who did most of their killing with Kalashnikovs from the former Yugoslavia.

It is useful for an IS aspirant to have a Raqqa to go to for training, for battle experience, for validation by a set of jihadi peers. But for a mobile terrorist franchise like IS or al-Qaida, Raqqa is a concept, not a place. Once Osama bin Laden’s Raqqa was in Sudan. Then it was in southern Afghanistan. It could be in Pakistan, in Somalia, in Yemen, in northern Nigeria, in the Russian Caucasus, or all these places at once.

On the bright side, San Bernadino does show that gun control laws are working, as the shooters had to obtain their weapons via an intermediary (a "straw purchase", which is a federal crime.)

The San Bernadino attack forefronts the fact that Islamic State lacks the ability to attack hard targets in the U.S., even when the attackers are willing to die during the execution phase, thus emphasizing their minimal and haphazard capabilities.