NOTE:  I have no idea why the text color and background color got cocked up!

Europe has been on tenderhooks over the recent Greek election.  The week prior to the election, Frau Merkel warned Greeks about the risks of "not living up to their agreements", in an oblique attempt to sway the voters from Radical Left Party, Syriza, led by charismatic Alex Tsipras.  Tsipras has been very clear in that the "Bailout" agreement was not working, was based on flawed assumptions by its austerity theory authors, was causing untold human suffering, and in plain words, would not solve Greece's debt issues during this generation, if at all.


In the run up to the election, numerous respected economists had begun to question whether the bailout's austerity would ever work, not just for Greece, but all of Europe.  Guys like Paul Krugman, the Bank of England Governor and Reza Moghadam, one of the IMF officials involved in the original deal.  Moghadam admits that both Greek bailout programs (of 2010 and 2012) were based on overly optimistic assumptions on growth, inflation, fiscal efforts and social cohesion.

In short, while Merkel, the politician, along with some of her fellow austerity proponents, not only stood unquestioning behind what was seen, both in theory and application to be a seriously flawed package, intellectuals and practitioners were vocal in opposition.  How Frau Merkle thought her implied ultimatum could sway an electorate that was seriously suffering, and receiving respected voices opposing austerity, not only in Greece, but anywhere, makes no sense.  Indeed, I had several friends swayed from long term party loyalties in order to "vote against Frau Merkel".  And thus, Syriza, led by young, charismatic Alex Tsipras, changed the face of Greek (and possibly European) politics, rising from a minor coalition of left wing groups to the ruling party. 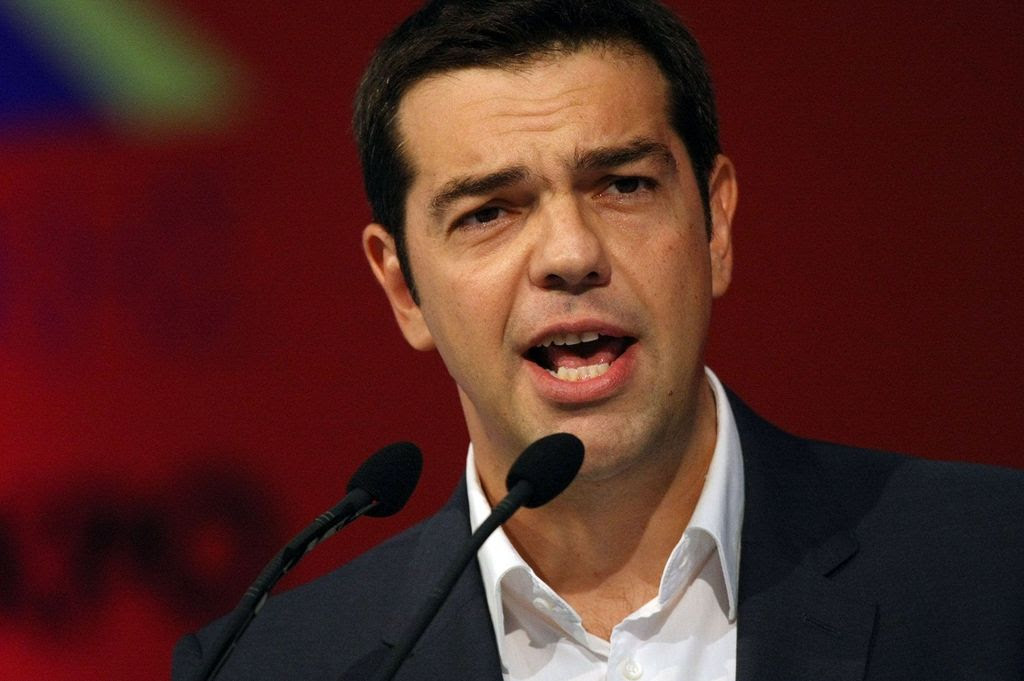 Now for the Grand Strategy part.  It has been clear that the backers of blind adherence to the bailout provisions had no strategic plan for dealing with a Syriza victory, other than to stick blindly to the bailout.  Nor had they done a reasonable recon of the party beyond it's leader, Tsipras, and his campaign pledges. But Tsipras was light years ahead of the austerity crowd.  Early the next morning, he had formed a coalition government with the Right Wing Independent Greeks Party, who shared Syriza's anti-austerity position, and ensured that certain "sacred" Greek institutions would not be threatened.  Tsipras' austerity opponents reeled and sputtered.  Even more amazing was that Tsipras formed a cabinet immediately and had a government ready to hit the ground running.  A totally unexpected feat for a parliamentary coalition.  Austerity proponents reeled and sputtered even more, openly expressing that they were confused, and warning Greece not to be "too hasty".

While Merkel et. al. were trying to convince Tsipras to back off from his anti-austerity stance, Greece's foreign minister dealt Merkel a huge setback.  Following Merkel's lead, the EU announced increased sanctions against Russia, calling them "unanimously adopted".  Within hours of taking office, Greece's new government complained it was not consulted before the European Union moved to threaten tighter sanctions on Russia, and thus the proposed sanctions were not legitimate and were an affront to Greece's sovereignty.

Rather than admit the oversight, and fearing that Greece wanted no sanctions at all, a shocked European Parliament President, Martin Schulz, told Greek newspapers, "Greece should not undermine EU policy on Russia at a time when it is seeking support from its partners over its economic problems."  Schulz had foolishly suggested that Greece no longer was sovereign in external affairs, and when the Greek foreign minister arrived in Brussels for discussions of the matter, Schulz had no option but to backpedal and offer lame explanations for his ill chosen words.  The end result, the EU, with Greece's concurrence, settled on only extending the expiring sanctions another six months, and the austerity gang remains confused.  So within 72 hours of the new government's start in office, the score was Greece 1, Merkel maybe 0.5, and Greece has established a modicum of recognition for its sovereignty, despite its economic subordination via the bailout.

But that wasn't the biggest shock to the system.  Syriza selected respected left wing economist and academician, Yianis Varoufakis as Finance Minister.  A totally non-political player, Varoufakis has been an opponent of austerity as well as the terms of the bailout from day one, and his reasons why have come to pass.  Now you have Varoufakis, who called it correctly, versus Merkel and her Finance Minister, Schauble, who called it incorrectly.  And, Merkel et. al. still have no idea exactly what Varoufakis has in mind, other than expecting the worst case scenario.  Why?  Because Merkel et. al. have war-gamed only continuing their failing austerity scenario, which is gaining opposition from more quarters than just Greece, versus nothing. Thus, Varoufakis could very well have the upper hand.  Sooner than Merkel would like, the EU and Greece must meet to discuss the standoff they perceive, and so far, all that Merkel has in her quiver of arrows is the notion that "agreements must be fulfilled", ignoring that they are not working as projected, and probably never will.  So Merkel et. al. are seen as confused, and Varoufakis is described as not only a brilliant economist, but a "Rock Star".  As one local portrayed him:

Yup, Mr. Spock has logic on his side, and Merkel only has obstinacy.  Oh yeah, Spock has a growing body of economists agreeing with the folly of austerity, many of whom find the terms of the Greek bailout the pinnacle of such folly.

BTW, Varoufakis is considered one of the leading masters of game theory.  You know, If we do this, they will do that, to which we can capitalize on this, etc.  In short, is the confusion that some players are suffering because Syriza hasn't a plan, but rather, because Syriza wants to ensure weakness in the opposition to give Syriza the advantage, and thus have not really revealed their plan.  Thus, when one of the lenders warned that Syriza had to be less confrontational, lest the next loan be taken off the table, Varoufakis responded that the next loan was not wanted, as increased debt does nothing but exacerbate the downward spiral caused by the bailout.  In short, Spock nullified the ultimatum.

Speaking of ultimatums, very often, they can be the worst strategic blunders imaginable.  There is no shortage of reputable military historians who hold that "Total and Unconditional Surrender" only served to prolong WWII and increase the cost of treasure to all sides.  There is a reasonable number of cases where labor unions have issued a "cave to our demands or be put out of business", and management has simply given the union one of the two offered courses of action and liquidated the company.  And, of course, the harm to employees far out weighted the harm to the owners.  As one of my grad school profs said many years ago, keep in mind that when you issue an ultimatum, you very well surrender control of the situation to the person you are trying to intimidate.

So, Merkel et. al. have issued a veiled ultimatum.  Greece must comply with the original terms, "or else".  Does Frau Merkel, or her choir director, Herr Shauble, realize that the "or else" ultimatum is usually, in both tactical and strategic terms, the weakest of all?   What if Mr Spock has already war-games all the potential "or elses" and has plans to overcome them?  Consider an EU expulsion.  Greece currently has sufficient resources, if debt service is ended, to not only pay their other bills, but use the billions in debt service avoidance to provide better social services.  Expulsion from the EU would enable Greece to gain increased revenues via the ability to impose higher tax rates on all foreign owned companies, something prohibited by EU regulation.  Take the Athens airport, run under contract by a foreign firm, resulting in high user fees to insure certain levels of pre-tax profit.  The contract would not have to be broken, but the taxation of profits leaving the country could make the current operator desire to get out.  In short, a "Grexit" would have more ramifications than has been in the public discourse.

Of course Greece will suffer pain via a Grexit, but that pain will not be exclusively Greek.  The Austerity folks have boxed themselves into a situation where there is no painless way out for the lenders, and many less painless ways out for the people of Greece.  Varoufakis knows this and knows a variety of ways of minimizing Europe's pain.  Merkel's intractability now has her and the Austerity crowd far behind in formulating both tactics and strategy.  Varoufakis has been war-gaming other approached to the crisis than that in place for a long, long time.  Merkel et. al. have not.

Has Syriza gained a strategic advantage?  We will see.  Right now, I'm betting that Tsipras, Varoufalis and Co are leagues ahead of the Austerity crew.  Perhaps even light years.  And, much to Merkel; et. al.'s concern, the austerity movement in all of Europe may be on the ropes.  It's hard to take on facts on the ground and Mr Spock's logic with, "So what if it isn't working.  You agreed to it."
Posted by Aviator47 at 4:28 AM