Russia's position gets a little more...interesting

Back in August (when the Guns of August were thundering in the eastern parts of was still nominally "Ukraine") Al wrote about the Curious Case of Russia. He noted that:

"The Cold War was primarily a standoff between two military powers. The Soviet impact on, and involvement in, the world's economy was negligible. Probably one of the major reasons the USSR collapsed. It was Soviet military, and the resultant political power, that we wanted to keep in check. We are now dealing with a new Russia, and that new Russia has become an economic player far greater than the old Soviet Union. Now, when Russia rattles it's political saber, there are economic ramifications of concern. Yet we still seem to be stuck in the Cold War mentality that Russia is always to be opposed."

and quoted an editorial from one of the Athenian newspapers that in their opinion "...a "stable and powerful Russia" is a key ingredient to global economic security." 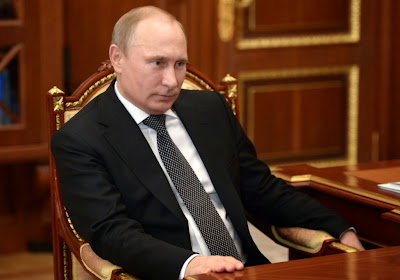 I'm kind of intrigued by this for several reasons.

One is that it tends to reinforce my suspicions that the rump-Soviet state is, in fact, what I called it back in August: "...a lot of the Soviet weaknesses...overlaid...with 1) a thicker layer of corruption and 2) an excessive, almost-Nigerian-level of extraction resource dependency." The Post article makes an interesting point, that:

"There's one way, and only one way, that this ends: with capital controls. Or, in plain English, by making it illegal for people or companies to turn their rubles into foreign currency. That would get rid of the selling pressure, and let the ruble settle at a new, lower equilibrium. Putin, though, is loath to use capital controls, because his political base—the oligarchs—wants to move their money abroad, whether that's to their London or New York hideouts."

So the "tyrant" is an economic hostage to his political condotierri, another little reminder of the old saying about doing anything with bayonets (or in this case, the long knives of your criminal crony-capitalist "pals"...) except sitting on them.

The other is that it gives me a nasty little cat-smile remembering all the Usual Idiots who were fulminating about how manly Vladi Putin was and how the United States needed a sharp dose of his shirtless manly manliness to counteract the emo-girly-man Kenyan Usurper.

To quote O'Brien from the Post: "At this rate Putin will be riding around shirtless because he can't afford one anymore." 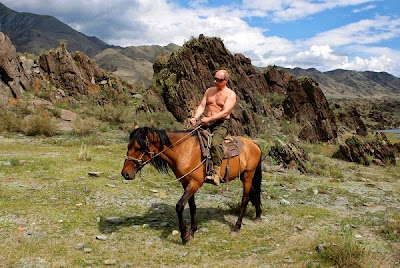 Perhaps the single most worrying part about this is the reminder that Russia - still a major Eurasian power and a nuclear one at that - is neither stable nor as powerful as it thinks it is.

This isn't to talk up my own country, whose political response to the Great Recession has been to double- and triple-down on the great shift to oligarchic meanness and stupidity that characterized the fucking Hoover Administration, but to note that for all that my country seems to be overrun with morons who think that "government is the problem" that if you deliberately set things up to govern badly it will be badly governed.

And that after a bad government the more-worse idea is to turn the levers of power over to a bunch of rich pricks whose only concern is their own profit. That's the sort of thing about the incoming Republican Congress (as expressed recently in the loathsome Wall Street Welfare rider to the cromnibus spending bill...) that makes me sleep poorly at times.

But I don't think I'd be sleeping nearly as well if I lived in Gdansk, or Tallinn.
Posted by FDChief at 12:05 PM