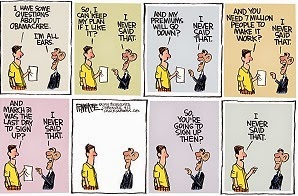 Many think President Obama's Affordable Care Act (ACA) has provided a medical salvation to a large proportion of the 47 million heretofore uninsured non-elderly Americans. In fact, it has compelled perhaps 1.6% more people to buy insurance in 2014 than were insured in 2013.

Even taking the rosier figure of 5.4% of the number of previously uninsured, this is hardly a success story.

Moreover, having insurance coverage is not the same thing as being able to pay for actual healthcare. To risk stating the obvious: Beyond paying one's insurance premiums, one must then pay for the actual medical care one seeks. It should seem obvious that many of the people who failed to buy health insurance failed because the cost of seeing a doctor was beyond their purview.

The big story, however, is the "ugliness of spirit" (to quote Paul Krugman from his "Health Care Nightmare") in the United States which the ACA has revealed. Over half of our State's governor's are rejecting additional Medicaid coverage, Florida's Gov. Rick Scott being one. Odd considering our not-compassionate conservative Governor Rick Scott made his money in the legally contentious, once-largest for-profit health care company in the U.S. (Columbia/HCA); one would think he had a heart for such issues.

The health economist Jonathan Gruber, one of the principal architects of health reform — and normally a very mild-mannered guy — recently summed it up: The Medicaid-rejection states “are willing to sacrifice billions of dollars of injections into their economy in order to punish poor people. It really is just almost awesome in its evilness.” Indeed.

Florida CHAIN, a group lobbying for "increasing the access to affordable quality healthcare, published an informative piece on what the legislators "hope you don't read and remember." From that brief round-up is this on the "spite tax":


How Obamacare has played out in Florida is that the Medicare - Medicaid population can no longer access medical care from the same doctors they had previously seen. Bottom line: doctors are unwilling to accept the 80% remuneration from Medicare when they will not have access to the 20% previously covered by Medicaid. (Meanwhile, many of those accepting full Medicare reimbursement grow rich from providing often unnecessary procedures or prescribing unnecessary or unproven medications hawked by their friends representing the interests of Big Pharma.)

What is the linkage between Obamacare and the refusal of doctors to accept patient who are enrolled in both Medicare and Medicaid?

Whatever the linkage, signs were in place in doctor's offices in 2012 stating that should the healthcare act pass, they would no longer be treating their patients who were dual Medicare + Medicaid recipients. These are the patients who will neither be able to afford the ACA coverage nor the medical care itself -- our neediest citizens who should be protected by such governmental programs.

The best parsing of the 1,163 pages of the “Patient Protection and Affordable Care Act” (HR3590) and the 337 pages of the “Health Care and Education Reconciliation Act of 2010″ (HR4872)—known collectively as the Affordable Care Act— can be found at this post on Dr. Lickerman's blog. A liberal M.D., he explains clearly why the Act will not be a boon to the average health insurance customer.

There is no need to compress his compression, but this is an example:

"Consumers currently have almost no ability to “vote with their feet. Thus, no competitive pressure exists to motivate insurance companies to lower their premiums at all (remember, just because there are multiple plans on the exchanges doesn’t mean they’re being offered by as many companies)."


The insurance companies grow rich, the doctors grow rich, and the poor go without care. A Federal mandate that people buy health insurance ≠ being able to afford health care.

Medicare patients who also qualify for Medicaid are being turned away from their doctors in Florida -- is this how Obama's vision was supposed to play out?

We need a new law that requires all doctors to honor Medicaid patients (bureaucracy rules.) If Congress would provide this legislation, then then Mr. Obama should use his flanking policy by issuing an Executive Order. If a doctor accepts Medicare, he should be required by law to provide care to Medicaid patients. To do otherwise is simple money-grubbing.

Ranger will bet the farm that our leadership class does not have a problem finding premium health care, paid for with our tax dollars.

Addendum: Yesterday's press covered the death of young Florida mother Charlene Dill who collapsed at one of her three jobs for want of healthcare for her documented heart condition. She fell into the "Medicaid Gap" because she lived in a state which would not expand Medicaid coverage. Her case is not an isolated one.