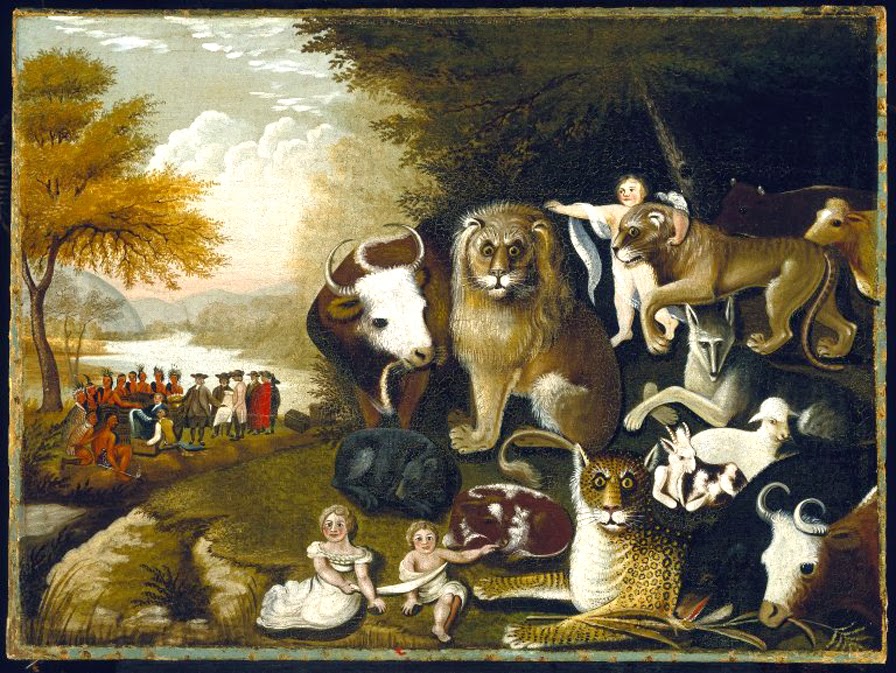 --Peaceable Kingdom, Edward Hicks
Do those eyes look at peace?

Ain't it funny how you feel
when you're finding out it's real
-- Sugar Mountain, Neil Young

Blessed are the peacemakers:
for they shall be called the children of God
--KJV, Matthew 5:9

One of RangerAgainstWar's gripes is the misuse of words in the Phony War on Terror (PWOT  ©). Take the term, "Peacekeeping".

"When the security situation in Afghanistan was collapsing, we might have come much more quickly to the peacekeeping and "nation-building" strategy we're beginning to employ now (125)"


Aside from the fact that strategy -- a word which implies a thought-out and concerted effort to achieve a desired goal -- is NOT a word which describes the United States' PWOT efforts, let us look instead at the term "Peacekeeping", a term often misunderstood and misused, often in an effort to justify a military presence.

Who doesn't want peace? Peacekeeping Operations (PKO) is an admirable yet elusive concept usually pertaining to efforts to lessen violence and chaos in failed states or in Low-intensity conflict situations. PKO can be a long-term or short-term solution to a problem, if not a resolution of the situation. The three United Nations' guidelines for PKO's are:

1) The consent of all parties
2) Impartiality
3) Non-use of force, except in self-defense and the defense of the mandate


Think of the efficacy of peacekeeping while considering some recent PKOs:


1) The British effort in Northern Ireland --

Was this PKO? Were the British impartial since they were supporting the Royal Ulster Constabulary? The reason for the violence was the Irish Republican Army's desire to rid Northern Ireland of the British presence.

Was this U.S. operation a PKO? Were the U.S. forces impartial? Did both sides in the violence accept the legitimacy of the U.S. unilateral effort? Since the Marines were bombed in their barracks and HQ, it would seem not, so this was not a PKO.

Were the NATO forces impartial? No, since NATO warplanes were bombing one side of the equation, so another "no".

Was the U.S. impartial? Did the anti-government coalition accept our presence? Did the U.S. have legitimacy?


A PKO that met UN guidelines but was ineffective was what we call the Rwandan Genocide. While the PKOs were impartial and accepted by both parties, still the genocide continued apace. So simply following UN guidelines may not be an adequate yardstick to measure a successful PKO.

An exception to the general failure of PKOs would be the Sinai PKO separating the Egyptian and the Israelis, keeping peace between former enemies. The peacekeepers are impartial and are there at the behest of both parties. The peace has been maintained.

For a PKO to succeed, both the peacekeepers and the opposing parties must be dealing from the top of the deck, and this is usually not the case in the usual scenarios, unfortunately.

So, is there such a thing as Peacekeeping? "Peacekeeping" is not the same thing as "Peace Making". Peacekeeping is a bit bromidic and euphemistic. One is not so much "keeping the peace" but holding the boxers apart until they can join in the fray once again. PKO's are doomed to fail, until the day honest brokers step up to the table and resolve their differences otherwise. Diogenes is still out there with his lamp ...

Being as we inheritors of the primate legacy, we do not look for rational, non-fighting solutions anytime soon. Perhaps, as with the schoolyard bully, the fight should be allowed, and until someone appears who can trounce him, the most brutish wins they day.
Posted by rangeragainstwar at 11:37 AM