Yesterday we finished voting in our "special election" in northwest Oregon.

I've been following this little treasure mostly as a way of checking on the credulity and stupidity level of voters in the Portland metro area, and the final readings of the Moron Meter are now in.

First, on the issue of fluoridation of Portland's water supply, a bizarre coalition of looney Left and looney Right defeated fluoridation because...well, because fluoride isn't natural. God alone knows what these people - about 85,000 of them, by the way - think about pasteurization, immunization, the Germ Theory of disease, and quantum mechanics. 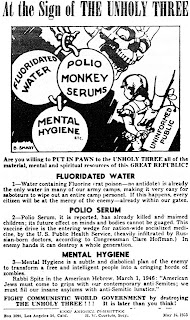 At least we're safe from those goddamn polio monkey serums.

I should note in passing that there are about 446,000 registered voters in Multnomah County, Oregon. And this election was, like almost all elections in Oregon now, done by mail. You didn't have to devote any time or effort to it. You opened the envelope, filled in the little ovals on the form, stuffed the thing back in another envelope and shoved it in the mailbox.

But aside from the usual non-interest in the election the real red light on my Moron Meter was pegged to these two guys:

First was a gomer named Lasswell who was running for a position on the Multnomah Educational Service District. Leaving aside the actual role of and value of the MESD, the part that caught me about this guy's ad in the Voter's Pamphlet was is complete and utter incompetence for anything relating to education or any other sort of political administration, for that matter. 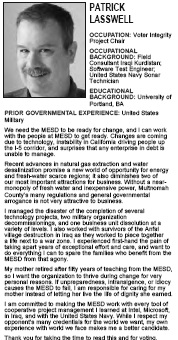 The giveaway was his observation about how he was gonna do to the MESD what he'd done in the city of Anfal when he was a'servin' of his Country in Iraq. Because, as we all know, an impoverished Third World city rife with sectarian strife in a former Ottoman province now devastated by war is exactly the political equivalent of the Multnomah Educational Service District.

Got that? This means that of the some 93,000 people in Multnomah County engaged and motivated enough in the political process to register AND to actually vote in this contest, one in four - 23,382 theoretically-sane individuals - were equally unable to make the same distinction Lasswell could not, between a smashed city in a Muslim state in the Third World and the educational administration of a mid-size American city.

But wait; it gets worse.

This goof, name of Morrison, a genuine full-on, rubber-room, unapologetically whackadoodle bull-goose looney whose only issue as a reason for running for Portland Public School board was because WiFi makes your brain all funny (and I tend to agree that someone's brain was all funny here but not that WiFi had anything to do with that) got 18.7 percent of the ballots cast.

Almost 19 percent. Of the people who are probably in the uppermost quintile of engaged and politically aware and socially motivated citizens in the People's Republic of Portland. Nearly one in five. 12,165 people - more than were in the crowd attending that Thorns match I went to watch Sunday.

Voted for a complete and utter tinfoil-hat-grade lunatic.

You can say that, well, fine; the "process worked". The loonies lost.

But think; these are people who shouldn't have gotten anyone's vote. Lasswell, yeah, okay, maybe a handful of people who liked the idea that he was an ex-GI. But Morrison? For fuck's sake, people, the man is certifiable. Around the bend. Ripe for a canvas sportjacket with wraparound sleeves. And yet more than twelve thousand of you fuckers voted for him!

And then you complain about how we can't have nice things.

This is why, people. This is fucking why.

Because a critical minority of you will vote for absolutely goddamn anything no matter how idiotic.

Think about it; if almost one out of five of the most well-informed, motivated, and civically-engaged people in a nationally-known hotbed of social progressivism and intellectual liberalism will vote for a lunatic who is mumbling about electrical radiation melting his brain what the hell is going on out there in places where they think people like Limbaugh, Imhofe, Palin, and Bachmann have a functioning cerebrum?

Labels: elections, Portland, stupid people and politician tricks, the goddamn U.S. public, this is why we can't have nice things