The sad fact is that I've had a post simmering on the hob over at GFT and just haven't had the heart to finish it.

Because it depresses me just to look at it, for what it says about my country.

The roux that started it is found here; the now-public Department of Justice "white paper" laying out the grounds for executive killing of U.S. citizens in league with "Al Qaeda or its associates."

Let me start off by saying this; this isn't "news" in the sense that it is nothing new and nothing startling. The bit about eliding the legal limits on extra-legal killing of citizens is, a bit, but as the position paper spells out there are precedents there for the recommended military actions. This is who we are, and where we've been, since 2001. All this memo does is recapitulate the current views of the executive agencies of the U.S. government regarding the "law of war" of the "War on Terror".

No, what I find so miserably bleak about this is not what it does but what it promises.

For a moment let's step away from the specific circumstances involved, the "non-international conflict" between the United States and whatever it may define as "Al Qaeda and its associates". Let's try and remove the self-fanned furnace of fear and suspicion that fuels the sorts of flights of conspiracy-theory and terror-fantasy and look at the specific acts that this paper justifies.

It posits that the U.S. government can, and should, deploy military force against an individual if

"...an “informed, high-level” official of the U.S. government may determine that the targeted American has been “recently” involved in “activities” posing a threat of a violent attack and “there is no evidence suggesting that he has renounced or abandoned such activities.”

Most commentators have remarked, and worried, about the implications of the vague definition of such terms as "informed, high-level" and "activities". The primary concerns of the critics seem to be about both the very limited sorts of oversight on who gets be the Chooser of the Slain and what "evidence" they need to have to make that choice.

I want to suggest that our concerns, as citizens of a republic that is technically a "government of laws not of men", should be broader and deeper.

Because I want to argue that this memo is simply another link in the chain, the chain we have forged link by link since 2001, that is dragging us closer to a place we may not want to go, a place where the fundamental relationship between the nation-state, our nation-state, and individual people are sharply redefined.

First, I would posit that since the codification of the concept of the modern nation-state a system of law and the status of legal authority differentiates how states deal with each other and how they deal with individuals, persons subject to their own authority as well as foreign nationals.

Relationships between nations are dominated by the reality that there is no higher authority that can bind or loose those nations.

"Higher" levels of organization which do exist, such as the United Nations, have no legal authority, and in practice lack the power of force majeur, to impose conditions or judgements on contending nations.

Rulers of those nations, therefore, often have (or see themselves as having, which comes to the same thing) no practical recourse outside of armed force when dealing with disputes with other nations. There is no functional way to impose legal constraints on a sovereign state outside those imposed by the state itself. Ideally those nations find some way short of force to solve their issues, but failing that force of arms has and presumably will remain the ultimate argument of sovereigns. So we say that "in times of war the law falls silent".

But this rule has a corollary; nations do not make war on individuals, even during wartime. They may kill or maim those individuals as part of that conflict. But AS individuals, when taken as individuals - even as spies - they are dealt with under law, albeit often the laws of war.

A nation-state, at least in theory and typically in practice, that has a disagreement with one of its own citizens will prosecute that conflict through its legal system. Such a system might be corrupt, or misused, or ineffective, or biased...but the very basis of civil society, the place beyond Hobbes' "war of all against all" is that the individual can - must - feel secure that the nation must pursue him or her through the forest of the law.

And this even applies to persons citizens of or subject to foreign nations.

During wartime captured enemies may be tried for violations of the laws of war, or as spies. During the Cold War both foreign nationals and U.S. citizens were tried and convicted and even executed under the law for their actions.

Such citizens may be pursued through the laws of their home country, or may be extradited (or their extradition pursued) to face the rigors of the law of the pursuing nation.

But they remain, as individuals, within the boundaries of the law. Not before this time has the U.S. attempted to deal with individuals or groups of individuals as it has with other nations, arguing that no law exists, that such people should be attacked as a nation may be attacked because there is no alternative.

What I want to suggest that this memo should remind us, and warn us, of the deep, dark, dangerous waters we have ventured out upon with the passage of the 2001 Authorization to Use Military Force that give the President of the United States the authority "...to use all necessary and appropriate force against those nations, organizations, or persons he determines planned, authorized, committed, or aided the terrorist attacks that occurred on September 11, 2001, or harbored such organizations or persons, in order to prevent any future acts of international terrorism against the United States by such nations, organizations or persons."

Because, as the DOJ paper merely echoes, this is a revolutionary change in the way the United States defines war, nations, and individuals.

By making "organizations" and "persons" subject to military force this law gives the Executive the power to, in effect, define anyone as an enemy of the state, and as such unprotected by the traditional measures that have shielded individuals from the monstrous power of the modern industrial nation.

And - so long as this law remains in force - there is no legal recourse for any of us who are so defined.

Worse; given the veil of security around the entire process of collecting "evidence", of determining what are "future acts of terrorism", of what constitutes "aiding terrorists" it is entirely likely that an individual's first intimation that he or she was a terrorist would be the arrival of a missile through the living-room window.

We have all read of the recent fulminations of those Americans who are beyond incensed by what they see as the U.S. government's frightful plan to violate their rights under the Second Amendment. Groups, often angry groups, have rallied, protested, are even now speaking out in strident tones at the dreadful spectre of the loss of individual liberty inherent in the proposals now debated in various public fora.

But this...this vast and restless expanse of unlimited power, this immense, lethal sea-change in the relationship between the individual, whether foreign or citizen, and the U.S. government...remains there in public view largely not just unfought but unexamined. The broader implications - implications that frighten me when I consider the possibility that actions that I might take, say, to protest some act of my government or its allies might place me beyond all legal safety into that Hobbesean bourne from which few travelers may hope to return safely - are taken simply as an accomplished fact, the new reality of our world, the fixed bounds of the power of our nation and the settled relations between it and us.

I know this, and yet, like most of us I pass through the days without thinking about it, like a sailor who sails calm seas and gentle breezes, never considering what might happen if the winds began to rise and the sea turn rough. It is only when I am forced to contemplate the perils of the deep waters charted by such documents as this one that I am fearful of the storms we may be brewing for ourselves. 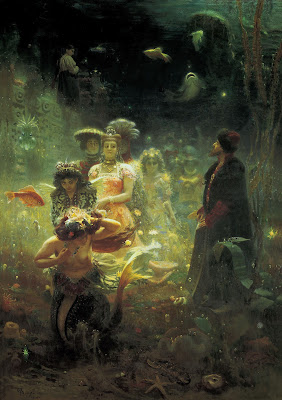 And, of course, these are the wastes to which these storms will drive you; from Charles Pierce's observations on the Brennan hearings today:

"It was most clear when Senator Ron Wyden of Oregon, a persistent critic of the administration's drone program, asked Brennan point-blank whether the president could order a drone strike on an American citizen inside the United States and Brennan didn't — or couldn't — give him an answer. What evidence, Wyden asked, does the president need to engage a drone strike? And could that power be used inside the United States?

"I have been a string proponent of being as open as possible," Brennan answered. "I believe we should optimize transparency and optimize secrecy and national security concerns. We can do both. The Office Of Legal Counsel advice established the boundaries, and we don't operate at those boundaries."

The man whom the administration has put up to head the CIA would not say whether or not the president of the United States has the power to order the extrajudicial killing of a United States citizen within the borders of the United States. (And a thousand heads on conspiracy websites explode.) And the hearing, remarkably, went on as though nothing untoward had happened.

He also couldn't answer straight out whether waterboarding is torture. He hid behind legalities as Carl Levin fumed. "I am not a lawyer," Brennan kept saying. People kept congratulating him for the blunt, straight answers he was giving. It was like watching an exotic tribe worship in its native tongue. This was not America as it would recognize itself. This was the worship of a different god."

And not, needless to add, a god of the bright shallows and clear skies, but a deity of an entirely different and stormy ocean.
Posted by FDChief at 10:54 AM