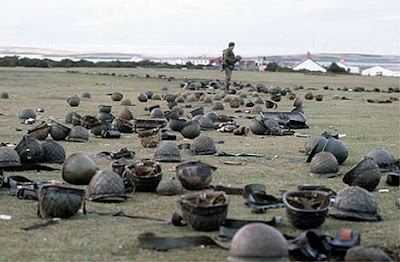 A former head of the CIA is said to have believed that U.S. diplomatic signals may have helped kick off the 1982 Falklands War:

"Mr William Casey, the head of the CIA, who was closely concerned in Cabinet discussion on this subject, has implied to us privately that he thinks the Argentinians may well have been led up the wrong path.

'They may have believed that their support for the US in covert operations in Central America was more important to the US than in fact it was, and could be expected to earn them American acquiescence in forward policy elsewhere.'

He said: 'Mr Haig's reaction to the information I had given him was electric.'

Sir Nicholas added: 'He wanted us to win and would have been horrified if the Argentinians had got away with it."

Hardly solid evidence, but intriguing nontheless. Particularly when you think of this in the context of the supposed July 1990 meeting between Ambassador Glaspie and Saddam Hussein which may (or may not, or might have have been even more complex effect) have had the result of greenlighting the Kuwait coup in the mind of the Butcher of Baghdad.

Or the recent tragicomedy in Libya. Or all the other examples of international encounters - back to the war of Jenkin's Ear, it seems - where one side, or the other, or both, said one thing and the other, or the one, or both, heard something very different from the intention of the speaker.

Let me say that I'm not sure whether to put a tremendous amount of credence in this report itself; it appears to be the opinion of one man, albeit one that was a very experienced observer of the foreign policies of his time. And the internal politics of the Argentina of 1982 make it fairly clear that the junta was already deeply committed to the idea of using force to claim the "Malvinas".

But what this odd historical footnote does seem to point out is that for all that we often like to think of "foreign policy", "geopolitics", and "strategy", as sciences, as matters that people and nations can make into tools to use for their interests and both study and train on to improve they are often laden with what another U.S. recent foreign policy thinker used to call "unknown unknowns"; complexities and unintended consequences that even the sharpest wit and the most diligent student cannot anticipate.
Posted by FDChief at 12:32 PM