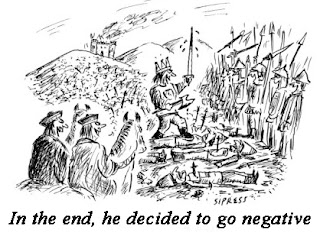 The urge to save humanity is almost always
a false front for the urge to rule
--H.L. Mencken

An important yet unspoken implication of the call for General Staff ethics training ("Ethics for Dummies") is this: Where is the ethics training for our Soldiers-cum-Warriors?  We don't talk about it, because warriors do not have ethics.

How can you have a cadre of hopefully ethical officers leading a group of killing warriors?  Answer: You can't; to imagine such a contradiction as effective is a joke.  The FOX news - Black Five contingent says, "Ranger stop spouting your high-falutin' sophistries," but Ranger is correct -- a democracy does not stand in name or reality if it adopts the Warrior Way in battle.

Warriors will do anything to win, versus Soldiers who are constrained in their activities by civilized norms recognized by our canon of common law.  You cannot expect ethical behavior from warriors, but you can from Soldiers.  Conforming to a body of ethics is the thing that allows Soldiers to return and enjoy a hopefully successful reintegration into their society. A warrior is condemned to living forever on the fringes.  While we may love our Kurosawa films, the actual life of a Samurai is not something most of us would relish.

Everyone calls our Soldiers "Warriors" today, but are loathe to consider the consequences of an actual transformation into warriorhood. Consider the Kandahar Massacre, in which Army Staff Sergeant Robert Bales soldier methodically killed sixteen Afghan civilians and injured five others in Afghanistan 11 March 2012 on his own, in two separate actions (SSG Bales is currently being held at the Ft. Leavenworth correctional facility.)  SSG, Bales's actions were those of a warrior -- brutal, fierce, unforgiving, relentless, cruel ... lacking in humanity and devoid of adherence to any martial code.

SSG Bales behaved like the warrior he was, and we did not like it.  We may impose much onto our fighting men, but there are certain divide which we cannot brook because we know at heart that we are them -- we are both SSG Bales, and the villagers whom he slaughtered.

We are aroused by the biblical story of Joshua fighting the Battle of Jericho, but we do not see ourselves as people who wreak such outright destruction.  We are people who, inasmuch as is possible, respect the elderly and the young; we respect that people wish to live a life, and work hard to cobble together a living best they can.  Their leaders may initiate wars and the people suffer and we understand all of this, and so endeavor to mitigate "collateral damage".  However, warriors do not take such considerations to heart.

Flying planes into the Twin Towers is warrior behavior.  It is indiscriminate, violent and abides by no social norms.  It is doubly frightening both in its outright destruction and its disobedience of rules of civilized behavior.  We do not wish to be such warriors.  Moreover, we cannot fight that impulse if we ourselves display and abide by the same imperative.

Leon Panetta, who does not understand what it is to be a Soldier, cannot codify a body of ethics for Soldiers or for their leaders.

Maybe the call to ethics training is a wake up call to return to Soldierly Values.