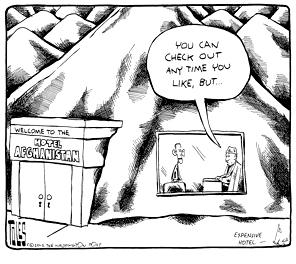 "Relax," said the night man,
"We are programmed to receive,
You can check out anytime you like...
but you can never leave"
--Hotel California, The Eagles
Think where man’s glory most begins and ends,
And say my glory was I had such friends
--The Minicipal Gallery Revisisted,
W. B. Yeats
______________________
The recent murder of U.S. Libyan Ambassador Chris Stevens and three other diplomats along with the release of Mark Bissonnette's book No Easy Day prompt further thought:

The Special Forces Son Tay raid was an Act of War into a hostile nation to retrieve United States Prisoners of War.   It was a high-risk operation, just as was the SEAL team assassination party's incursion in Abbottabad, Pakistan to kill Osama bin Laden.  The difference is, Pakistan is an ostensible ally, and allies do not invade other allies; the idea is, a nation runs hostile operations in hostile countries.

If Son Tay had failed, the U.S. could accept that fact and the resultant loss of friendly lives, but what would a botched job have done to America in the case of the OBL raid? Could we have accepted a Black Hawk Down scenario, in which U.S. dead would be dragged through the streets of a friendly nation in hideous glee?

Would the U.S. have fought any Pakistani troops sent to establish Pakistan's control of their sovereign territory?  Did anyone wargame these questions?  Were the risks worth the payoff?  Was the killing of OBL worth taking these risks?

Since the inception of the Phony War on Terror the military logic of operations has consistently been composed of pie-in-the-sky planning and ignoring worst-case scenarios.

What strategic value attended this operation?  If the intel was as good as Bissonnette's book suggests, why not just JDAM the target area?  If indeed killing was the object, why not simply put a precision target on the compound?

Maybe the fix was in, and the Pakistanis had been read into the scenario and had agreed to avoid and contact with U.S. troops, but this seems unlikely. If this were true, then they are a duplicitous bunch of opportunists sans straight-talk or straight-dealing. Whatever the situation, the operation lacked any semblance of military logic.

These thoughts pose further questions, "What is 'hostile'?"  Are Egypt, Libya, Yemen, Iraq and Afghanistan allies or even friendly, or are they hostile to the U.S.?  How does the U.S. treat enemies, and how, friends?  Can we even distinguish the difference these days?

It is hardly credible that Iraq and Afghanistan are friendly to the U.S.  It is readily believable that they will suck every dollar that we will throw their way, but they will never love or befriend us, and to believe so is delusional.
Posted by rangeragainstwar at 2:46 PM