I've been following with a sort of mild delight and horror the postings of a Facebook friend about some sort of mass conk light installation thing planned for the ruins of Hadrian's Wall in the English March district. 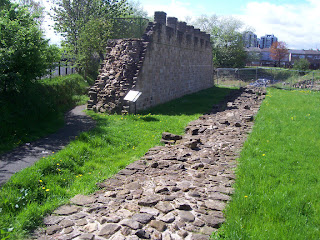 Apparently the idea is that tonight everybody and their cat is going to turn up - I'm exaggerating, there is some sort of organization to where everyone is going - and light up the old vallum and the castria for the first time since the old fortification went dark some time in the middle 5th Century A.D.

"A sequence of 500 "illuminations" at 250-metre intervals will roll westwards from Segundum fort, Wallsend, at 5.45pm, reaching Carlisle three quarters of an hour later and ending on the final, largely fragmentary stretch of the wall above the Solway. Timings and gas supplies are being synchronised so that the whole of the ancient frontier will be illuminated at the climax for the first time since Hadrian ordered its building in AD122."

The history geek and goof in me that likes this sort of fun and silly stuff - dressing up in garb and playing at knights, SCA-stuff and all that - loves the notion that reenactors, Roman wannabes, history buffs, birthday partiers, bicycling cheese enthusiasts, a theatrical troupe doing son et lumière at Segundum fort and "a torchlit fancy-dress procession with acrobats dangling from a heliosphere balloon in the centre of Carlisle" will converge on this ancient artifact and have a big ol' goof with gaslights for the night.

The old soldier in me shakes his head and wonders what the old sweats of the Legio II Augusta have thought of the cycling cheese-lovers or the dangling acrobats as they dug the trenches and built the 2nd Century equivalent of the MacNamara Line.

What would the local garrisons, left behind when the legions sailed to the mercies of the Picts, the Norsemen and the Saxon invaders, have thought about the "display by one of her five children who is a trained fire-eater"?

What would the reivers who rode the Border for centuries have thought about all this peaceful fire in the night?

And it occurs to me that they would probably have grinned and nodded, pleased that their descendants are able to assemble in great and abiding peace to make a silly show of their grim old battlements. For the reality, when you think on it, of the story of the Wall, its abandonment, and the hard centuries between the fall of Roman Britain and today are one of great unease, of war, suffering and tragedy as the people of Roman Britain, already conquered by one invader, were left to be seized by another as the Angles and Saxons swarmed in. And after them the Vikings, and the Normans. And this was when the locals weren't fighting one another. 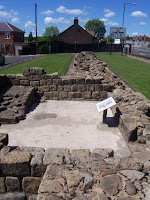 Like most of the rest of human history, the story of the Wall is a story of a hard-won safety briefly kept.

So while the soldier and historian in me mocks the acrobats and cyclists and cheese-eaters - gently, a little - for playing foolish games amid the ruins of a deadly and desperate fortification, the soldier, the man and the father in me revels in that all these people can be foolish and fond and silly and peaceful and happy, lighting the remains of that grim, unhappy time. In the best sense, what soldiers and fathers and mothers do is win that brief space of time and place for those they love to be safe, happy and loved.

For when the night is often long, and cold, and the moments of sunlight and peace fleeting, they are all the dearer for their brevity.
Posted by FDChief at 7:02 AM