Strategic Theory: The Distinction Between "The Operation", "an operation" and "Local Battle" 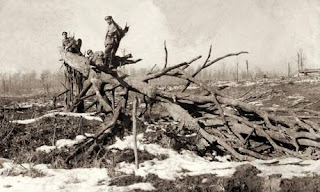 German soldiers, 1917, on the Verdun front

Today the news is full of the current offensive in Afghanistan. The town of Marjah is target and the battle is being proclaimed as a "turning point" with Marjah described as the Taliban's Alamo. With all the hyperbole, conflicting information and the lack of any information from the other side, how to make sense of what is going on? Strategic theory offers an option in the distinction between "operation" and "local battle".

Clausewitz's general theory and approach to strategic theory has had several significant theorists who have further developed his general theory and expanded it in significant ways. Aleksandr Svechin, who served as first a Czarist Army and General Staff officer and later as a commander in the Red Army, is perhaps the most significant Clausewitzian theorist of the first half to the 20th Century. In his classic, Strategy, Svechin writes:

The Operation and Local Battles

Thinkers who still live by the remnants of the Napoleonic era are inclined to write operation with a capital 'O'. Ludendorff dreamed of such an Operation in the World War: he would have called the attack on Vilna and Minsk in the middle summer of 1915 an Operation; however, Ludendorff did not call the Tarnopol breakthrough in 1917 in response to the Kerensky offensive an Operation, because for this breakthrough to grow into an Operation, according to Ludendorff it would have had to continue to the Black Sea and in the process cut off and take prisoner most of the Southwest Front and all of the Romanian Front. The French have thought in the same vein: they are prepared to use the term Operation for the Lorraine attack, which was planned for November 14, 1918, but was never carried out because of the armistice, and in their fantasies was supposed to cut off and encircle major German forces in Belgium.

In accordance with our notions of modern reality, we do not spell 'operation' with a Capital 'O' and have emphasized in the title of this section [An Operation with a Limited Goal], the limited goals of an operation; nevertheless we consider it necessary to make a definite distinction between operations that achieve an intermediate goal on the way to the end of military operations and local battles.

An operation does not go beyond the general combination of efforts for achieving the ultimate goal of the war because the results of one operation are the conditions in which strategy plans the next phase of the armed conflict, while actions that have no effect on the subsequent course of the war are purely local. If they acquire a large enough scale (such as the Japanese expedition to Sakhalin in the summer of 1905 or the English colonial conquests in the World War and so forth), we are amenable to calling them local operations. Such actions often pursue the goal of occupying favorable diplomatic and economic positions in concluding a peace.

Any kind of operation has its costs, and the organizer of an operation seeks to cut these costs. Local battles are two-sided costs of an armed conflict; the more disorganized the front is the higher the costs will be. Partisan warfare, although it is the embodiment of a lack of organization, is capable of greatly raising the cost of war for the enemy. Of course, higher costs are capable of defeating any undertaking; we have made this remark to avoid the accusation that we have a low regard for partisan warfare.

Insofar as we try to achieve positive goals, an operation is an incomparably more economical way of expending military force than local battles. Soldiers are very capable of seeing the difference between operational rationalism and operational shoddiness and are much more eager to sacrifice themselves when they feel that they are on the way to achieving the ultimate goal of a war. Commanders who abuse local battles themselves give evidence of the poverty of their operational talents. What may be completely impossible on a local scale or will require incommensurate sacrifices may be achieved incidentally and much less expensively on an operational scale . . .

Svechin is talking about operations for limited goals. The war in mind is a war of attrition, where the first battles were inconclusive, the war continues. He makes the distinction clear: an operation is a rational step in achieving the larger political goal of the war, in effect setting the stage for the next step or operation which in turn sets the stage for the next. The strategist uses operations to achieve the means to the political goal. A local battle, on the other hand, is simply that, a tactical conflict aimed at physical destruction of the enemy and unconnected from the operational/strategic sequence. The "operational" phase of a local battle lasts as long as surprise is in effect, at which point the battle becomes wholly tactical. Svechin says that in many of the French World War I offensives from 1915 on, surprise was considered unnecessary in comparison to the need to stockpile massive amounts of munitions and range their artillery, thus giving the Germans plenty of warning of what was coming. The battles were seen as being the first part of massive gains, of essentially the complete defeat of the enemy in a single "Operation" as Svechin describes them, but in reality lead to nothing beyond the achievement of limited tactical objectives. These objectives divorced from the operational sequence, but aiding in attrition of the enemy's combat strength. This explains why Svechin finds local battles to be uneconomical in terms of military resources.

So, a big "O""Operation" is essentially fantasy, whereas an "operation" is part of a strategic sequence, while a "local battle" is tactical (as in not only its focus, but also as not being part of a larger strategy) or even "tactics gone mad".

Verdun is a classic example of a local battle that grew to tremendous tactical proportions, became what Svechin refers to as a Materialschlacht which in effect is war/battle as an industrial process. The subject of Verdun rates a separate thread so I'll leave that for now.

So, the question from a strategic theory perspective is - is Marjah an "Operation", an operation, or a local battle? In the case of Marjah there was no surprise involved since logistical requirements (and internal political considerations) precluded it. The attack was essentially announced in advance. It is tauted as the beginning of the end for the Taliban in Helmand province, but the political resources which the Afghan state would have to provide do not seem to exist. If there is no political follow-up - as in Counterinsurgency warfare theory - there is little hope for eventual success. Some say, "we'll have to wait and see" meaning wait for something good to happen, but that only indicates the lack of any strategy at all. To be an operation this attack would have to be part of a whole sequence of operational steps leading to the achievement of the strategic goal.

On the other hand, the Marjah offensive could be simply a military action in support of diplomacy, that is the US/NATO negotiation process to remove themselves from the conflict, in effect leaving the Afghan state to its own devices. Up till now the Taliban have been operating/negotiating from a position of political strength. By presenting them with a military defeat in Marjah, the US/NATO side turns the tables on the Taliban and allows themselves a better position in which to bargain. This would be part of a larger strategy and would qualify as an operation. An operation meant to help cover a strategic withdrawal, or a radical reformulation of the political purpose as presented to the various US/NATO publics.

Marjah is just the latest in a series of "decisive battles" presented to the public. An earlier one, the second battle of Fallujah in Iraq, was presented in the same way. It kicked off right after the November 2004 US elections and lasted into December. On my last thread, bg commented:

I've been reading about the ongoing "assault", said to be the biggest offensive in the war. At first glance, it sounds kind of silly, but it reminds me a lot of Fallujah. Say what you want, the Marines did an excellent job in Fallujah, no COIN there, that was classic street fighting and was executed beautifully with tactical deception and solid TTPs. And it did make a difference in the fight in the Western desert. It was a turning point and IMO eventually led to setting the conditions that allowed the politicians to claim victory and leave.

Second Fallujah qualifies as a Materialschlacht, that is a local battle grown to huge proportions. It followed a huge logistics buildup and massive use of ordinance and commenced with little surprise. The tactical approach here reflected an industrial process rather than the "speed, cleverness, concealment, and tricks" which Svechin associates with the normal tactical approach. Concerning one Marine Corps tank company, its commander stated in regards to Fallujah, "My company has fired close to 1,600 main gun rounds, over 121,000 7.62mm and 49,000 .50 caliber rounds." An after action report of infantry house clearing stated, "To send Marines in to clear an enemy-occupied structure without heavy preparation fires was tantamount to suicide . . . Whenever we located an enemy position that needed to be cleared, we used a combination of rockets, tanks and bulldozers to destroy the structure." Thomas Ricks, Fiasco, pp 403-4)

Imo Fallujah constitutes a classic local battle victory for the US, but a US operational defeat in that the knock-on effects were used by the opposition to thwart the US's larger strategic/political goals. The laying waste to a Sunni city did nothing to popularize the Allawi government to the Sunni population who boycotted the January 2005 elections. This in turn led to a continued unraveling of what little remained of any combined Iraqi consensus. The result has been the destruction of the Iraqi middle class as it existed prior to 2003, the ethic cleansing of Baghdad and other cities, the repression of various minority groups and Iraqi women (who enjoyed a relatively high status in the Middle East prior to 2003), and the triumph of Iranian interests in the new Iraq. The current result is a strategic win for Iran - which undoubtedly influences their actions today - and a strategic defeat for the US.

So contrary to the implied conclusion of bg's comment, the US should hope that Marjah is something quite different from Second Fallujah.
Posted by seydlitz89 at 11:59 AM