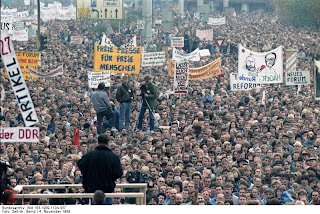 With all the hoopla about the 20th Anniversary of the Fall of the Wall, perhaps we should ask ourselves what exactly is the significance of this event and all the various events associated with that Annus mirabilis of 1989 and revolutions that swept away Stalinist Europe.

A good place to start in considering a retrospective is with Timothy Garton Ash's 1989!. Much to understanding those times is to get a "feel" for the electricity that was in the very air that people breathed. Ash was in Poland, East Germany and Czechoslovakia at just the right times and experienced the moods among the crowds. In his essay he relies on several concepts to help explain not only those events but how they have since been interpreted. For instance the idea of hindsight bias, or simply, "what happened had to happen" or simply deterministic fate. In regards to the Berlin events this runs "Communism was at an end, the German Democratic Republic (GDR) was broke, they needed a way out and simply sold out to the West". This goes hand in glove with another dubious notion that Ash doesn't mention in this essay, but is so very common, that is that those in power always call the shots. This notion is the basis of all government conspiracy theories, that is when something happens those with the power made it so. Common people, even organized in great numbers never really make a revolution, maybe a nudge, but not really a difference . . . 1989 proves that wrong and makes the use of mass action possible given the right motivations, conditions and contingencies.

The year started uneventful enough, the leader of the GDR telling the world that the Wall would last "for another 100 years" and who was to disagree with him? The leadership elites of both East and West had become accustomed to the stability the Cold War brought, to the predictability and sustainability of keeping both sides as they were. This did not consider the feelings and aspirations of the people in the Warsaw Pact or even Russia (as opposed to the "Soviet Union"). Clausewitz wrote that the material side of organized force was a "simple wooden handle" as opposed to the moral side which was the "shining, well-honed steel blade". This also assumes that the leadership wielding the sword know what they are doing with it.

There must have been something in the world's air, since in China a democratization movement developed between April and 4 June when it was brutally crushed. What had sparked that protest had been a funeral of a popular official, but the reaction was particularly marked in eastern Europe, where it divided the leadership between hardliners who supported what the Chinese government had done and those who saw the "Chinese example" as something to be avoided at all costs. It is here perhaps were Mikhail Gorbechev, who influenced the events of 1989 more than any other leader, exercised the most significant effect rejecting the Chinese example as an option, or at least the option of using Soviet Troops to do what the PLA had done.

In Poland, Solidarity was elected into office in the first free elections since 1945, and Gorbechev and Glasnost were attempting to rethink "the system " in the USSR. Change was in the air, but at what point would it be seen as too much and at what point would the "Chinese option" kick in? Tensions were high and the situation only needed a bit of a push to set the whole unstable structure in motion, but towards what?

The Hungarians in effect lit the fuze with a picnic in August by opening up a section of their border to Austria as a sort of party between two neighboring towns. This followed a limited crack in the Iron Curtain that the Hungarians had made in May. What they did not anticipate was that over 600 East German vacationers would "crash the party" so to speak and cross over into Austria. Suddenly Hungary became the favorite vacation spot for East Germans, and the Hungarians failed to do anything to stop them. The GDR responded by refusing to allow people to travel to Hungary, but then those wishing to flee started gathering in West German embassies in Prague and Warsaw. This created great pressure both inside and outside the GDR.

At the same time as the "pull" to get out, there was an internal "push" for reform across the GDR. Weekly demonstrations started in September, but gained a much greater momentum on 9 October with the first Monday demonstration in Leipzig following the 40th anniversary of the GDR on 7 October. The Leipzig demos climaxed with the one of 23 October drawing over 300,000 people, gaining Leipzig the title "Hero City" or Heldenstadt der DDR. The reason for the title was clear since in September and October going out to demonstrate against the GDR government meant possible arrest, later police harassment and physical abuse. For instance on 8 October 500 were arrested, and many more beaten, at a peaceful demonstration at the Gethsemane Kirche in East Berlin, which was another center of the protest. The government tried to quell the protests with the semblance of change, Erich Honecker and most of the old line resigned on 18 October, only to be replaced by Egon Krenz who was even less popular than Honecker had been. Krenz had visited China earlier that year and praised the "Chinese example". This only spurred the demonstrators on more which in turn led to the largest demo of them all, one million at Alexanderplatz on 4 November, five days before the fall of the wall.

The "push" met the "pull" with the freedom trains which transported 12,000 East Germans who had been held up in Poland and Czechoslovakia to West Germany during the first week of October, the one event proving a catalyst to the other since the trains were required to pass through Leipzig . . . It was one of the greatest mistakes the GDR leadership made during the whole crisis, but not the biggest nor most spectacular.

That honor belongs to GDR Politburo member Günter Schabowski, who in one of the best examples of the importance of being clear with your meaning at public speaking events botched a news conference and told the people of the GDR they were free to travel outside the country "immediately" (this is a youtube link since you have to see this to believe it). The looks on the Border Guard (including Stasi Passkontrolle) officers is amazing.

The rest is history as they say, although what did happen could have turned out a wide variety of less favorable ways (especially for the Eastern Europeans) and even some more favorable (in terms of economics) than what it fact did occur. This becomes clear when comparing the events in Berlin with those in Prague which also required a whole sequence of contingencies to occur.

What stands out for me is the potential effect of the common person, what people can do for themselves if properly motivated and willing to go through a period of adversity and even pain. That and keeping your wits about you, not reacting violently to power, but making power appear impotent by its inability to instill fear. Get the uniformed "keepers of the peace" to start doubting not only their power but their purpose and watch what happens. Perhaps that is the big message from 1989, that any political elite would not want you to know.

The second thing was the cluelessness of those in power on all sides. Even Gorbi, who was the most influential, had no idea what the effect of his actions would be and went a bit hard line later on. Of the Allied leaders, Pappy Bush probably comes out the best (especially when compared to Thatcher who made even Krenz appear "reform minded") in that he got out of the way of German reunification. During the 1990s there were a whole series of former officials who came out with memoirs explaining how they had known all along what was going on - ninty-nine point nine percent of which is self-serving tripe imo. At the time we (as in strategic intelligence collection) were being told to either "expect anything" or it "will all blow over". It was the ops who were able to adjust well to quickly changing events, less so the managers in my experience. Those closest to the streets were the most clued in, those high up on the food chain, in positions of bureaucratic power, the least.

Where was I on 9 November? It was a Thursday so I was home from work with the family watching TV (usually switching between East and West German and AFN) and heard Schabowski's statement. "WOW, this is big!" I tell the wife and head for Checkpoint Charlie by way of the U-bahn getting off at Koch Strasse. There already were crowds gathered on the West Berlin side and climbing a light pole (I could do stuff like that 20 years ago) I could see hundreds of East Berliners patiently waiting. At this point the corrected version of the new travel law came out and people were spreading the news on our side that it would only come into effect on the 11th, that is the people would have to apply on the 10th and be able to travel the next day. So I went back home, feeling as I was a bit guilty for leaving the wife at home alone with our sick daughter. What I didn't realize until the next day was that Ossies had lost their fear of the system and the GDR authorities had lost their faith in it. The "push" met feeble resistance and kept pushing, so the local border guard commanders simply opened the borders and kept their troops in barracks lacking any coherent orders from above.

The next day my office opened a screening center in a former elevator factory and over the next days I screened scores of "pullers" whereas the "pushers" were mostly back in their East Berlin beds by noon. Some of the first to desert - and those I interrogated - were those who would have under different conditions been those most relied on to enforce the "Chinese option".

In spite of all the work I had to do, I was in a state of euphoria during that entire time and into Spring 1990. It was the most sublime period of my life.