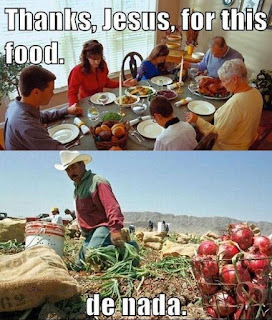 Todd Miller over at Tomdispatch has a decent little discussion about the backstory to the "OMFG! The beaners are revolting! Send in the Army!" tales we've been reading about ARNG troopers being dispatched to help fortify La Frontera, seeing as how the traitorous Dhimmicrats won't vote for Trump's Big Beautiful Wall.

I've been thinking about this, and ended up posting a long piece over at GFT discussing how I think that the problem goes much deeper, into the way we frame this as an "immigration" or "border control" problem.

It's not. It's a "capitalism" problem, and to even have any remote hope of solving it - and as Miller points out that when the Chinese climate change hoax really kicks in it's likely to mean massive population shifts from the tropics on a scale that will make the current situation look like a country club weenie roast - would mean a seriously unsparing look at how We the People have set up our economic system to lure the very people We then have the sort of hissyfit about that leads to us doing dumbass things like the election of an orange-colored real estate grifter to national office.

"The bottom line is that to keep meat cheap the business had to cut costs, and worker's pay is typically the single biggest cost of any business.

The same is true of nearly any business you look at that employs significant numbers of undocumented people. Construction, landscaping, agriculture, "hospitality" (meaning hotels and restaurants). This isn't anyone's "fault", or, if it is, it's Our fault, We the People. We've forgotten that it's the nature of capitalism; you can hope to charge everyone a premium and go broke, or you can skin your costs down to the bone and make them affordable to Joe and Molly. It's why commercial aviation sucks. It's why WalMart. It's why the guy running that leaf-blower snuck in from Michoacan.

So unless we plan to start paying what we'd need to pay to give all those legal citizen busboys, maids, drywallers, chicken-gutters, and tomato-pickers a living wage the reality of people coming here outside the legal process is going to continue."

Read the whole thing, as the kidz say.
Posted by FDChief at 9:00 AM