We went to a memorial Saturday for a World War 2 Veteran who recently died at 92 years old. He was with the 25th Infantry Division at Schofield Barracks on Oahu on 7 December 1941.  He had always said it was not the worst place to be on Hawaii that day - as the 24th and 25th Divisions combined suffered just three killed and 26 wounded compared to the 2000 plus sailors killed and 1000 plus wounded.  The attack on Schofield happened just after 25 Val dive bombers from the Zuikaku and 14 Zeros from the Soryu and Hiryu attacked the adjacent Wheeler Field.  There they completely destroyed forty P-40 and six P-36 arrayed in a row like a carnival shooting gallery and not behind the revetments that were built for them.  Plus they damaged approximately 50 additional aircraft and inflicted 36 killed and 74 wounded on Army Air Corps soldiers.

After Wheeler the Japanese aircraft flew over Schofield Barracks at low altitude strafing the engineer, infantry, and artillery quadrangles, officer quarters, and the post hospital.  The redlegs at the artillery quad suffered the majority of the casualties.  A bomb hit a corner of the engineer quad and one hit the parade ground (or were they wayward Navy anti-aircraft shells?).  But neither caused casualties which were all due to strafing.  I have to wonder whether our vet had ever met James Jones, author of 'From Here to Eternity'.  I saw the movie version a few years after it came out in the 1950s.  But as a savvy teenager
even I knew that the scene with Burt Lancaster as 1st Sergeant Milt Warden on the roof cradling an M1919 Browning in his arms was complete BS.  His left palm would have cooked off like a well done steak – blackened Cajun style.  But apparently a Technical Sergeant William O. Gower, 27th Infantry Regiment was decorated by the Division Commander for a similar act.  Gower "took a machine gun and ammunition to the roof of the 27th Infantry quad and engaged strafing aircraft, at first cradling it in his left arm, then mounting it on a tripod. He remained on the roof throughout the

attack."   The 27th was also James Jones’ regiment, so he at the least probably attended the award ceremony for Gower if he did not know him personally.  During the attack two Japanese aircraft crashed into the nearby hills of Wahiawa.  It is believed that at least one and possibly both were brought down by small arms fire from Schofield.  Is that true?  Who knows, but those strafing runs were low, slow, and straight with no maneuvering, so perhaps?

The vet we memorialized Saturday was born in 1925 so was only 16 at the time.  A Washington State boy, he was brought up in Yakima and Wapato before enlisting.  When he finally returned stateside in 1944 on rotation furlough he was suffering from his sixth bout of malaria.  And he was wearing four battle stars aka campaign stars - one for Pearl Harbor, another for Guadalcanal, a third for Munda, and the fourth for Vella Lavella.  The 25th earned its nickname 'Tropic Lightning' and the lightning bolt in their unit patch at Guadalcanal.  It is also where their commander 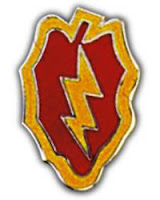 'Lightning Joe' Collins earned his nickname.  Some claim it was Collins who first innovated with the TOT or 'Time-on-Target' technique at Galloping Horse hill on Guadalcanal with the initial rounds of six field artillery battalions landing simultaneously.  Maybe so for the US Army, but the Brits did it earlier in North Africa with all batteries syncing their time to BBC signals.  And I can't believe that concept or something like it was not experimented with 25 years earlier in France by Brits or Germans or French.  Besides, Collins was infantry branch so if he used the idea there it was probably from listening to a smart Division Artillery Officer (who probably got it from one of his even smarter junior officers or perhaps from an Aussie who had served earlier in the 8th Army).


His recollection of Munda was hunger,  He and the men in his squad lived on a single can of C-rations a day for 19 days.


I do not recall him ever saying much about Vella Lavella other than 'spider holes'.  After capture, the SeaBees turned Vella Lavella into a key airfield for degradation of the important IJN base at Rabaul and allowed Rabaul to be bypassed.  But Vella Lavella itself was the first leap in the island hopping leapfrogging strategy.  By going to Vella Lavella they jumped over the 10,000 man Japanese garrison on Kolombangara Island and rendered them useless.  That strategy was developed 32 years earlier in 1911 by Admiral Raymond Perry Rogers at the Naval War College - that despite MacArthur's Trump-like claim that he had invented the theory.  The Japanese themselves had also used it in their earlier drive to Southeast Asia.  Probably the Athenians used it 2500 years ago in their Aegean domination?