What's the English for "freikorps"?

Out old Intel Dump pal Phillip Carter has a piece up at Slate discussing the presser put on by the White House Chief-of-Staff, former GEN Kelly.

Carter says all the usual things that are being said elsewhere about the Kelly presser - that it pretty much told anyone who doesn't have a DD214 that their only role in military affairs is to "support the troops" and STFU - but one line from the Carter piece really struck me.

"The burden of our post-9/11 wars has been heavy but not widely shouldered nor shared. The result, echoed in opinion surveys of veterans and military personnel, has been a mixture of pride, nostalgia, and resentment."

Yeah, well, there was another group of veterans and military personnel who held strong feelings of pride and nostalgia about their recent wartime service and deep resentment towards the civilians and political leaders of their nation they held responsible for their failure.

They were the guys from the Kaiserlich Deutsches Heer, the Imperial German Army, after 1918.

And by the 1920s they had given up pretending even notional submission to the civilian government of Weimar and went out into the streets to fight, helping to contribute to the chaos and social unrest that eventually enabled totalitarian rule come to power in Germany.

In the bitterest of ironies, the supposed true German nationalists they helped to power considered them a danger to the fascist state. Many of the ex-freikorps were murdered or disappeared in 1934 when the true believers consolidated power.

Are the situations of interwar Germany and post-modern America very different?

Is it good to have a small, self-selecting group within a popular democracy with a monopoly on the use and understanding of armed force and the attitude that that monopoly makes them politically superior to those without it?

You can argue about the iniquities of a draft and I won't argue back. But the Founders of this nation had some strong opinions about the danger to a republic from praetorian treason.

I will suggest that former GEN Kelly's remarks should make you nervous about listening for the sound of the dagger leaving its sheath. 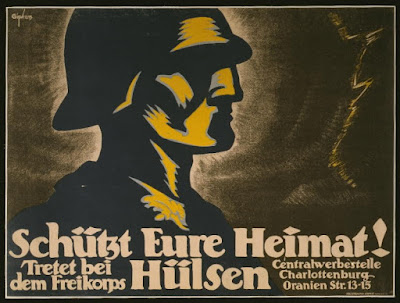 There is more than one way to get stabbed in the back.
Posted by FDChief at 2:27 PM