25 April is ANZAC Day.  Wear a sprig of rosemary in honor of the Australian and New Zealand Army Corps:
https://www.awm.gov.au/commemoration/customs/rosemary/

TheANZACs suffered and endured the stupidity of Winston Churchill and Lord Kitchener at Gallipoli in the worst planned amphibious operation ever.

They fought in France at the Somme, at Passchendaele, at the 2nd Marne.


Their Camel Corps fought and outflanked the Turk in the Sinai, in Palestine, and in Jordan during Allenby's anabasis to Damascus and beyond.  https://www.youtube.com/watch?v=07JGpardvLU&feature=youtu.be

In WW2, they again suffered and endured Churchill's overreaching in Crete and mainland Greece. 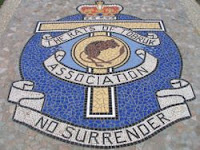 That same year they fought off Rommel's (at that time undefeated) Africa Corps for eight months at Tobruk until finally relieved by the Eighth Army.  Later they fought with distinction at the 2nd Battle of El Alamein.

But the Australian mainland had suffered the first of 97 separate air attacks by the IJN and IJAAF (that first attack was by 242 aircraft, most of them from the same aircraft carriers that had hit Pearl Harbor).  And at Singapore, Churchill's so-called Gibraltar of the East, Britain's disastrous defense lost the Australians 15,000 troops to Japanese POW camps.   Many of them died during the Sandakan Death March which matched (or was worse than) our experience at Bataan.  Or they died on the Burma Railway.  So the Aussie Prime Minister turned down further requests by Churchill and brought his troops home to the Pacific Theater.

Section C of the Allied Intelligence Bureau, also known as the Coastwatchers and mostly Australians, played a critical role in the Solomon Islands campaign.  https://www.amazon.com/Lonely-Vigil-Coastwatchers-Walter-Lord/dp/0670437654/ref=pd_sim_14_1?_encoding=UTF8&pd_rd_i=0670437654&pd_rd_r=3AYRCBXGDPC4GSXZK3RC&pd_rd_w=UCzTU&pd_rd_wg=d5HqE&psc=1&refRID=3AYRCBXGDPC4GSXZK3RC

Then in New Guinea, the ANZACs saved MacArthur's entire SW Pacific strategy by taking and holding the Kokoda Track; and doing outstanding work at Buna-Gona and Salamaua-Lae.   After that, Mac then gave them the dirty jobs of mopping up Bougainville, New Britain, etc.  And relegated them to the flank in Borneo while the US Sixth Army got the glory in the Philippines.  There was some strong resentment in Canberra for that treatment.  And rightly so IMHO.

No space to list all their contributions - I missed many other battles.  But on the 25th, my bride is promising to cook up some ANZAC biscuits (guaranteed not to crumble no matter how long they spend being bounced, banged and beaten in the bottom of a military mail sack): http://allrecipes.com/recipe/9816/anzac-biscuits-i    Might even need to wash them down with a tinny of Australia's favorite bevvie.