75 years ago on 16 September 1941 Tehran was occupied by a joint Anglo-Soviet force.

The stated reason was to rid the country of German nationals and German influence even though Iran had declared neutrality in WW2.  Perhaps there was some minor Axis sentiment in Iran.  But it was rather more anti-Russian and anti-British than pro-German because Russia and England had played their Great Game in Iran since the early 19th century alienating most Iranians.

But the two major reasons for the occupation were different.  One was to open up the Trans-Iranian Railway to provide supplies and armaments for the Soviet war effort.  A land route to Russia was critical with the limited lift capacity of, and danger to, the Arctic Convoys to Archangelsk and Murmansk.  Reason two, which was crucial for the Brits was to secure the Iranian oilfields for the British war effort and for the stockholders of the Anglo-Iranian Oil Company.  In addition to the oilfields, the Abadan refinery was the largest oil refinery in the world at that time.

The invasion into Iranian territory started on 25 August. 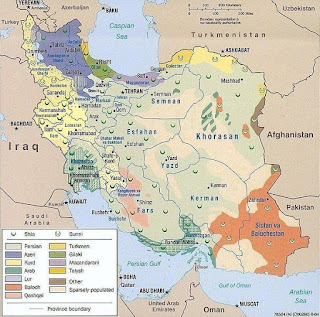 The Iranian Army in 1941 was basically a counter-insurgency force.  Their only combat experience was subduing internal insurrections by ethnic Kurds, Azeris, Turkmen, Lurs, Baluchis, Gilaks, Arabs, and Qashqais.  Or the army was busy suppressing tribal unrest due to Reza Shah’s attempts at de-tribalization and urbanization of nomads.  The Army had no experience against a modern military force.  They were trying to go through a period of modernization promoted by a group of young western educated junior officers.  But the high command was useless in that effort as they were mostly  old cronies of the Shah from his days in the Persian Cossack Brigade.  Sycophants and yes men, they were more interested in building up their personal wealth than building up the army.  The Shah himself as a former gunnery sergeant was somewhat of a micromanager, which lead to a lack of resourcefulness in much of the officer corps.  Plus there was the fact that horse cavalry and peasant conscripts did not do too well against tanks and artillery.

So the Shah sued for peace three days later on August 28th.  But the Brits and Soviets ignored him until they jointly seized Tehran on the 16th and forced him to abdicate his throne and replaced him with his son as their puppet.

The Soviets invaded with three armies and 1000 T-26 tanks.  In the west the 44th and 47th Armies of the Transcaucasus Front pushed in from the Azerbaijan SSR.  And in the east they invaded from Turkmenistan with the 53rd Independent Central Asian Army.  There are not a lot of English sources available on the Soviet aspect of the invasion.  The only one I have read is Professor KavehFarroqh’s book “Iran at War”.  It is amazing to me that the Soviets had the wherewithal to conduct this operation because in the first week of August alone at the Battle of Smolensk they had lost over 750,000 men, 3000 tanks & self-propelled guns, and 900 aircraft. 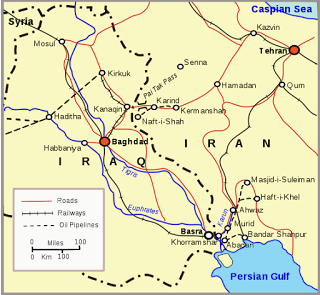 The British, using mostly Indian troops, also split their advance.  In southern Iran in Khuzestan the 8th Indian Infantry Division sent the 24th Brigade in an amphibious assault across the Shatt-al-Arab to take the Abadan refinery.  Abadan reportedly had to be taken against fierce resistance as some Iranians reportedly fought to the last man.  Another amphibious landing was made at Bandar Shahpur (now known as Bandar-e Emam Khomeyni).  Bandar Shahpur was critical as it was the terminus of the Trans-Iranian Railway needed for supplying the Soviets with war materiel.  The rest of the division in Basra forged east to take Khorramshar. 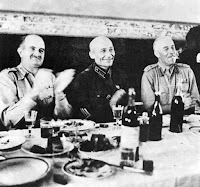 The central Iran advance was led by General Slim (later of Fourteenth Army fame in Burma).  I believe that is Slim on the left sitting next to General Novikov of the 47th Army.  Slim led a scratch task force consisting of one brigade from his own 10th Indian Infantry Division, plus the 2nd Indian Armored Brigade, and the 4th British Cavalry Brigade.  They crossed into Iran from Khanaquin, Iraq.  They traversed the Zagros mountains at Pai Tak pass driving to the Naft Shahr oilfields and Kermanshah with a lot less opposition than the 8th had in the south.  General Slim called it an ‘opera bouffe’.  The wikipedia page claims General Slim “directed the battle remotely via radio from India”.  Not so according to author and Gurkha officer John Masters who is quoted as saying that Slim in his khaki colored station wagon did a personal recon of the Pai Tak Pass well in front of the Task Force spearhead.

The aftermath:  The US Army Transportation Corps soon came in to run the railroad and provided 3000 additional freight cars and 148 locomotives.  They built wharves and improved roads and airfields.  American contractors came in and established assembly plants for aircraft, trucks and other factories.  So the Soviets got 5 million tons of armaments and supplies by rail and road thru that ‘Persian Corridor' plus 4800+ combat aircraft flown in and 180,000 trucks driven in.  That materiel was of significant importance (if not decisive) to the Battle of Stalingrad.  By the way, the 53rd Army later fought at the Battle of Kursk and after the war participated in the Soviet occupation of Manchuria.   The Anglo-Iranian Oil Company got their oil and eventually were renamed British Petroleum of Deepwater Horizon infamy and before that the Prudhoe Bay Oil Spill and the Texas City Refinery Disaster.  Reza Shah died in exile in South Africa.  Reza Shah’s son got the throne for 38 years until he too was deposed in 1979.  General Slim went on to become a Field Marshal, a viscount, Governor General of Australia, and was voted Britain's Greatest General by UK WW2 veterans.  Rear Admiral Gholam-ali Bayandor who led both the land and sea defenses against the Brits in Khuzestan and was killed there is today still commemorated as a hero and martyr by the Iranian military.
Posted by mike at 8:05 AM