Some ideas cannot be killed and yet are too stupid to die.

Apparently there's a nutty little cluster of fuck buried in the U.S. State Department (from CNN via Pierce):

"More than 50 State Department officials signed an internal memo protesting U.S. policy in Syria, calling for targeted U.S. military strikes against the regime of Bashar al-Assad and urging regime change as the only way to defeat ISIS.
The cable says that U.S. policy in the Middle East has been "overwhelmed" by the continuing violence in Syria. It calls for a "judicious use of stand-off and air weapons, which would undergird and drive a more focused and hard-nosed U.S.-led diplomatic process."

The memo calls on the U.S. to create a stronger partnership with moderate rebel forces to battle both Assad's forces and ISIS, which would change the tide of the conflict against the regime and "increase the chances for peace by sending a clear signal to the regime and its backers that there will be no military solution to the conflict."

It also warns that as the regime "continues to bomb and starve" Syria's Sunni population, the U.S. will lose potential allies among Syria's Sunni population to fight ISIS. Moreover, it says, U.S. failure to stop the regime's abuses "undermines both morally and materially the unity of the anti-Daesh coalition" and "will only bolster the ideological appeal of groups such as Daesh, even as they endure tactical setbacks on the battlefield."

It's...it's hard to tell where to start with this ridiculous level of horseshit.

Maybe here: "judicious use of standoff and air weapons"..? Judicious? How the holy fuck do you use a cruise missile "judiciously"? Tack a get-well card to the nose? Ensure that it has a jihadi-seeking sensor in the guidance package? Who the hell thinks this? State has seen a damn sight of war since 2001. It's been fifteen years of nonstop bombing and shelling and killing-wogs-in-kinetic-ways in the Middle East. Have these people learned nothing from all that so-far-prodigiously-unproductive bombing, shelling, and killing..?

If you can show me a "judicious" way of throwing high explosive long distances I will carry your rucksack from here to the Halls ofMontezuma and kiss your ass when we get there.

Or...how about this one; "moderate rebel forces"? Moderate based on what metric? 50% less headcutting? 100% How many of their raggedy-ass "fighters" have read Atlas Shrugged? Where are these paragons of virtue? Can anybody find me someone, anyone, who is "moderate" in the damn cesspit of ruin and merciless hatred that used to be "Syria"? Can anybody tell me why I should trust ANYone there to tell the truth about their "moderation"? I mean, any State Middle East hand to believes any local between the strandline of the eastern Mediterranean and the Persian Gulf who boasts of their "moderate" credentials should have their fucking head examined.

According to CNN, "The 51 officials who signed the memo are mostly from the rank and file of the department, many of them career officers in the foreign service who have been involved in Syria policy over the past several years either in Washington or overseas." which, frankly, tells me a hell of a lot about why our "Syria policy" has been as fucked up as a football bat.

One thing I will give the last Adminstration credit for; in general it has resisted sticking this country's head further into the Middle Eastern tarbaby. I have often wondered why it has insisted in sticking to the ones it is already attached to. But this idiotic memo is perhaps a good reminder of why it's so hard to stop being stupid. 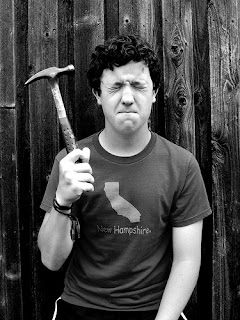 Because there's always people in critical positions who think that their contrarian idea is contrary because it's too clever for everyone else to recognize how clever it is and not because everyone else realizes it's completely moronic.
Posted by FDChief at 1:35 PM