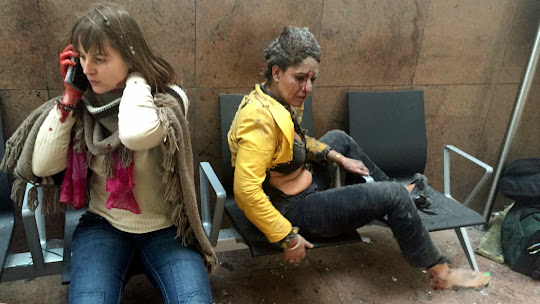 For the record; Brussels is the EU capital, and the EU is and has been deeply involved in fighting in North Africa and the Middle East. The Belgian "air component" (the air arm of the Belgian armed forces) has been bombing the Islamic State in Iraq and Syria. Obviously, none of that "justifies" blowing up women and kids in train stations and airports.

But at the same time let's be adults; if you're part of fighting a "war on terror" you shouldn't be surprised when terror fights you back.

I thought we learned that sixty-odd years ago. The people who died under the bombers in London and Berlin and Tokyo were "innocent civilians", too, and they died in their job lots for their leaders' policies. For American politicians to act outraged about this is an insult to We the People's intelligence. This is war, the war our politicians have argued for and supported for years now. This is as expected and expectable thing in a war as the sun rising.

Innocents die in war. If you don't like that, your only real option is not to fight one.
Posted by FDChief at 11:19 AM