Just a few days over a century ago the Lusitania was torpedoed and sunk.

There is a good article in Fortune magazine about stalled attempts to recover her and to determine if she did in fact carry war material to England as the Germans claimed.  This time though it is the Irish Government and not the Brits that are holding up the attempt.

At the time (and since then) there was lots of propaganda and counter-propaganda regarding the event.  There have been other articles in the past confirming that there was ammo aboard, tons of speculation but was there any definitive proof?  Not sure myself but I would not put it past the British war office.  One article from the Daily Mail in 2008 'seemed'' to confirm they carried 303 rifle cartridges.  The bigger question is whether or not they carried guncotton and/or artillery shells that could have caused the lerge secondary explosion.   It would be good IMHO to know the truth.  I do not believe it was the Lucy that got us into WW1, but perhaps it head-shaped us into our eventual entry two years later. 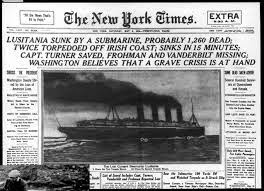