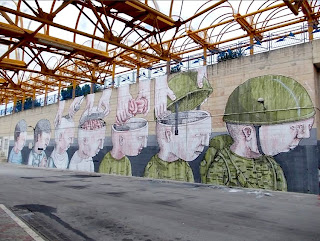 "Quit smiling. What are you smiling for?
This is an arrest." This is your mug shot,
not your prom photo. I was smiling from happiness;
my government will not disappear me
--Peace Demonstration
Maxine Hong Kingston

Lt. Stanley McChrystal enters an army in the late 70's
that is broken, riddled with drugs and race problems.
The soldiers aren't very good:
a collection of drunks, dirtbags,
junkies and scammers.
--The Operators, Hastings (171)
___________________
Ranger has noticed a dismissive attitude toward the United States Army that fought in Vietnam, particularly at the Bad Boy lad's sites. He is not sure the reason for the snitty attitudes, but it seems like the lads doth protest too much. Their attitude ranges from supercilious to dismissive, implying that the U.S. experience in Vietnam is passe, and today's ranks are far superior in technology, doctrine, etc.

This arrogance of dismissing the recent past as Old School and no longer relevant is short-sighted and dangerous. Wars are not fought

ex nihilo, and that certainly holds for today's supposed efforts at Counterinsurgency (COIN) or Counterterrorism (CT) .

Today's military can focus on Low-Intensity Conflict (LIC) and pretend that it is a real war, when it is actually (fill in the blank.) In fact, today's Army has slack that we did not have in the 1960's and 70's, despite the rhetoric of how the last decade's stress has been so professionally addressed.

The U.S. fought a war in the Republic of Vietnam while also being deployed to address the Warsaw Pact. My service in Vietnam was preceded by a line Infantry assignment facing this threat on the German border -- these were real threats. Today, the U.S. faces no such opponent.

As for combat ability, today's Army (USMC) has not fought any battles against hardcore enemy Battalions, Regiments or Divisions. The RVN battles against enemy units with organic artillery and severe unit discipline are legend. Enemy supply columns actually rolled down the Ho Chi Minh Trail like rush hour traffic in downtown Baghdad. The enemy had the "division slice" of support for their operations, to include timely and accurate intelligence on U.S. intentions and capabilities.

The enemy in Vietnam had the will, the capability and the intent to prepare the battlefield at higher echelons, something unheard of in the Phony War on Terror (PWOT ©). The threat faced in Vietnam was real and vicious ... what equivalent did we see after the fall of Baghdad or the months following the invasion of Afghanistan? The Taliban has no Regimental or above combat capabilities.

Per U.S. forces, we had one echelon above Corps, meaning we had a real Theatre Army scenario, to include a Theatre Army Commander with Corps supporting. This means not only did we have Theatre - Corps - Division assets, but we also had the on-call abilities of the RVN forces including all of the usual suspects: Artillery, Aviation, Combat Support and Combat Service Support. We operated as an Army, not as door-kicking combat Brigades sans higher assets.

So what's the reason for the dismissive attitude toward my Army as being anything less than professional? Where is the evidence that any draftee fought less professionally than did the forces in the PWOT? From whence this lack of fraternity?

The troops in the Vietnam War were largely draftees and they earned their battle streamers with the same valor as did troops in all previous U.S. wars. What battles in Afghanistan or Iraq demonstrated the level of violence experienced by the Infantry units in the Vietnam War?

Further, there is a logical fallacy built into the argument of the Old Army detractors who say the 60's and 70's Army was "amateurish". If that is so, then we must accept that the Warsaw Pact was neutralized by a bunch of quacks. The next illogical step is to believe that today's professional volunteer force is totally responsible for the defeat of al Qaeda, despite the fact that less than 200 al Qaeda operatives exist worldwide (per former Central Intelligence Agency Director Leon Panetta.)

Framing the argument qua the Andrew Exum crowd, a crowd of amateurs defended the U.S. against Warsaw Pact with thousands of tanks, artillery pieces and millions of soldiers, while we are now ably protected against a laughable threat by the New Warriors.

Taking their argument to its logical ends, one must also believe the military leadership during the 60's was also incompetent, though carrying experience from two wars before assuming leadership in Vietnam. Contrast that with the present day Professional Army which sports a dearth of combat experience at the highest levels. The depth of experience was greater in Ranger's time frame than it is today, contrary to the hype.

And this is why we need poppy eradication programs in Afghanistan (though the Bushmills tap will always flow.)
Posted by rangeragainstwar at 1:38 PM