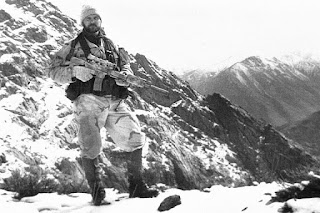 Fourteen years after the first publicized meeting engagement in the Phony War on Terror (PWOT ©) -- the Battle of Roberts Ridge -- USAF Technical Sergeant John Chapman (KIA) is being considered for a posthumous Medal of Honor (MOH) based on "newly accessed" graphic data.

The new data? A grainy and indistinct film recently released in the New York Times. But this fuzzy footage is superfluous because the Sergeant's 2003 Navy Cross award citation already told the story of an action which clearly met the bar for a MOH.

In a 2010 post on his blog [War and Remembrance], Ranger said that Sgt. Chapman should have received the MOH. Why is the Air Force only now considering the upgrade of his Air Cross?

What was being hidden, and why now?

In an incompetent mission, Airman Chapman was left for dead on the battlefield by SEALS. He continued fighting for an hour, before dying from his injuries. Were the authorities waiting to release this Bad News until all living players had received their retirements?

Certainly the war effort and the concept of a viable Joint Special Operations Command (JSOC) would have been harmed if it had been acknowledged that the SEALS had abandoned a member of a sister service. Special Operations have not come far since Desert One, despite the Hoorah and exorbitant funding.

The Special Operations Command ratholed a clear MOH action because it would have shed light on the fact that the vaunted SEALS left a seriously-wounded man to die on the battlefield. While they returned to find injured fellow SEALS, they did  not do so for Air Force member, non-SEAL, Sgt. Chapman.

The SEALS have gained a cachet following the release of Marcus Luttrell's book, Lone Survivor (later a movie). Luttrell was the first of the literary SEALS in the PWOT.

But Ranger questions why the Navy even has an element like the SEALS. They are essentially Naval Infantry which lack the training, experience and institutional knowledge to be infantry. Why does a United States fleet Navy need its own infantry personnel thrown into a fight which is remote from any fleet activity?

Why were the SEALS on a frozen Afghan hillside with nary a whiff of salt in the air?

This battle lacked the hallmarks of advanced military thought or action. In addition, the players lacked for functional equipment. A quick review of the enemy situation reveals the irrelevance of this mission for which Sgt. Chapman died on a meaningless piece of real estate:

They were a squad or platoon minus, or a reinforced squad, occupying an isolated high-altitude observation post; one could stretch the point and call it a combat outpost. Whatever we call it, it was probably occupied by Chechens who got there by climbing the mountain.

This means that United States forces could have interdicted their support and utilized ambush and blocking positions to kill them as they went up or came down the mountain. This is Infantry 101,  of the sort any Army or USMC grunt instinctively understands.

The Battle of Robert Ridge is reminiscent of the Battle of Ia Drang (LZ X-Ray, 1965) in the Republic of Vietnam, the first meeting engagement of the North Vietnamese Army against a heliborne U.S. Army. The Roberts Ridge debacle could also be equated to the Battle of Mogadishu ("Day of the Rangers", Blackhawk Down, 1993) in Somalia.

The truth is simple: if the enemy is assaulted, he will fight back and accept the losses. Our technology means naught when the equation is reduced to rifle against rifle. At that point, you have already lost..

Obviously, the SEALS have no patience for the basics of ground combat, and assaulted an objective without proper visual reconnaissance.

The Operations Orders for this action are still classified -- why?