The gunners have this plan, sir, but...

From a 1530ish manual on military ordnance; rocket cats. 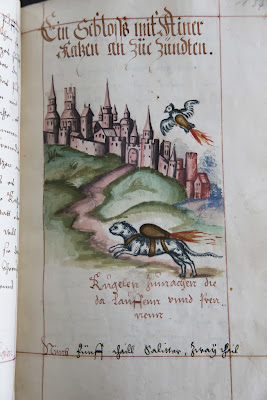 The work is by one Franz Helm of Cologne, who was an artillerist and ordnance specialist during the early gunpowder warfare period. And Franz had some ideas that seem to be some pretty outside-the-box thinking.

"Helm explained how animals could be used to deliver incendiary devices: "Create a small sack like a fire-arrow . if you would like to get at a town or castle, seek to obtain a cat from that place. And bind the sack to the back of the cat, ignite it, let it glow well and thereafter let the cat go, so it runs to the nearest castle or town, and out of fear it thinks to hide itself where it ends up in barn hay or straw it will be ignited."

In other words, capture a cat from enemy territory, attach a bomb to its back, light the fuse and then hope it runs back home and starts a raging fire."

So far as I know there is no actual evidence that Helm, or anyone else, actually tried this.

Probably not a good idea whenb you think about it, given that a flaming cat, or crow or pigeon, is just as likely to flee in panic towards the nearest cover - the nearest probably being your own mess tent.