I usually try and keep out of the tactical minutia of our present Glorious Little Wars. But this just caught my eye whilst I was tooling around the blogosphere. 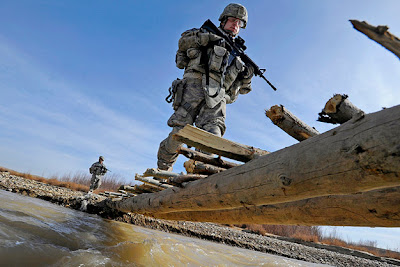 It's from a post entitled "We're Still At War" over at Mother Jones. It's a snapshot taken of a PRT somewhere in Afghanistan.

But I've gotta say; nothing in this photo makes me think of "war". It looks, if anything, like a couple of GIs goofing around on some low-importance field problem. All we're missing is the blank adapters.

I mean, I know that this is a low-threat environment. But what is that poor bastard on the logs going to do if someone decides to bust a cap on his ass?

And his buddy behind him - what's he doing? He sure as hell isn't overwatching the far bank, based on where he's looking and where his rifle is pointing. Where's he going to go if things suddenly get hairy?

I mean, what this looks like to me is two guys sauntering through what we used to call a "linear danger area". Hopefully there's already someone on the far bank pulling far security as well as someone out of the picture on the near side with a 240B providing overwatch for the entire mess.

I hate to nitpick this stuff. But, honestly - isn't the whole point of COIN/counterinsurgency that there IS no "rear area"? That anytime you go outside the wire, you're moving like you anticipate contact? Didn't we learn this the hard way in the RVN, that "Charlie is waiting for you to relax"?

I know this is trivial stuff, but, really...aren't we supposed to have been fighting muj in central Asia for ten years now, rather than the one-year-twelve-times way we did the last one? Why don't I get a better feeling from these snapshots?
Posted by FDChief at 4:13 PM