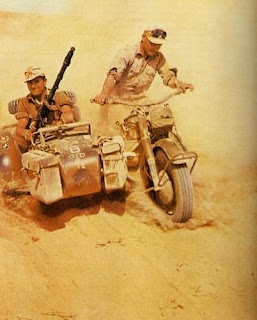 This is one of a series of posts on the 70th Anniversary of World War II. April 1941 is remembered as a time of Nazi conquest. Yugoslavia and Greece were both conquered as a prelude to Operation Barbarossa which was to begin in 22 June. While the Spring of 1940 had been a time of defeat for France with the expulsion of the British form the continent, the Autumn brought the Battle of Britian and something of a respite.

North Africa and the Middle East however were something of showcases of British success during this period. The Italians had attacked Egypt from their colony of Libya in September and Marshall Graziani's offensive had bogged down after advancing barely 40 miles into Egypt. The commander of the British Forces in the Middle East was a very competent by unlucky professional soldier by the name of Archibald Wavell. He unleashed his Western Desert Force (commanded by General O'Connor) in December 1940 against the Italians and the Western Desert Force (WDF) was able to smash nine Italian divisions, capture 130,000 troops and drive the rest 500 miles back across Libya by February 1941. In January 1941, Wavell also launched attacks against Italian Somaliland and occupied Ethiopia, both of which surrendered the following Spring.

So in March 1941 things were looking pretty good for the British WDF in North Africa. Enter Erwin Rommel and the Deutsche Afrika Korps. In January the Luftwaffe's X Flieger Korps had been transfered from Norway to provide air support for the Italian Army and had also denied the WDF the use of the port of Bengazi requiring their supplies to continue to be moved all the way from Alexandria along the coast road. The BBC has an interesting animated map of the entire campaign.

Rommel started his unauthorized counteroffensive on 24 March with the newly arrived 5th Light Division "Afrika", later the 21st Panzer Divison, as well as the “Ariete” and “Trento” Italian motorized Divisions along with what remained of the original Italian Army. He smashed the British 2nd Armored Division, advanced across the desert with most of "Afrika" while the Italians advanced along the coast road. He was able to chase the WDF all the way back to the Egyptian border, investing Tobruk along the way, but failed to capture it, which was not surprising since he didn't even have a full Panzer division at the time and the Italians were still strung out along the coast road.

What made Rommel's task easier was that Wavell had been forced against his better judgment to send four divisions to Greece at the beginning of March.

The Die Deutsche Wochenschau from April 1941 describes the landing of the German troops, this advance, as well as their reception in Bengazi with some interesting footage.

While the withdrawal of most of the WDF was the obvious reason for the British defeat, was it the only one, or even the most important?

Let's not limit this discussion to this one operation, but include the entire campaign. This campaign in North Africa while warfare, was unique to World War II in that there were few if any documented atrocities committed by either side.

I have my own view on why Rommel was successful in this instance, which I will share in good time, but I would like to hear what ya'll think. Especially given that these very sands are being fought over yet once again in our own time . . .
Posted by seydlitz89 at 8:18 AM