Perhaps the most bizarre part of the infamous National Highway Transportation Safety Administration (NHTSA) draft EIS is not that it advocates easing up on the emissions standards for American-made vehicles. Comforting business at the expense of the public is, after all, the preferred approach of the Republican Party and the current Administration in particular. The GOP has become not just explicitly the Party of Calhoun but the Party of John D. ("the public be damned!") Rockefeller.

No, it's the part that's buried on page 37 of this sucker. It reads:

I want to just stop and think about that for a moment.

This is the U.S. government - and not just the U.S. government, but a U.S. government headed by a man who insists that anthropogenic climate change is some sort of gimmick cooked up with the nefarious yellow Reds to kneecap the Trump Organization's profits - saying casually that the mean surface temperature of the Earth is going to climb almost 4 degrees C in roughly 80 years. Ho, hum. Nothing to see here.

This is not sane or sensible. This is a "What the fucking ACTUAL fuck!?!" moment.

To put this in perspective, historians strongly suspect that considerably more limited climatic fluctuations contributed in large measure to economic and military problems in the Roman Empire in both the Third and Fourth Centuries:

"(t)he crucial development was the severe drought of the fourth century that lasted nearly forty years, one of the worst in 2000 years. Documented by the Dulan-Wulan tree-ring chronology, prevailing drought conditions began in 338 a.d. and continued until 377, when wetter conditions returned. The El Niño-Southern Oscillation (enso) Pacific Ocean climate pattern is a candidate as a broader climate system cause.Both the Douglas Fir data from New Mexico and the kauri data from New Zealand are sensitive to tropical Pacific enso forcing,the most geographically pervasive mode of climate forcing on earth. The extent of this drought in time and space suggests that it played a critical role in driving the mobile pastoral federation that coalesced around the name of “Huns” somewhere east of the Don River, to seek pastures and predation farther to the west and south. The dendrodata confirm speculation about an environmental factor in the Hunnic invasion that goes back at least a century. Historical sources indicate that the Huns reached the Don River by the 370s and crossed it c. 375. Their attacks in the area north of the Black Sea drove the Goths to flee into the Roman Empire and ultimately to attack it, destroying an emperor and his army in 378 at Adrianople (now Idirne, Turkey), one of the greatest military defeats in Roman history."
(McCormick et al, 2012)

This drought was probably the result of a slight cooling period that is estimated to have been less than 1-1.5 degrees C. 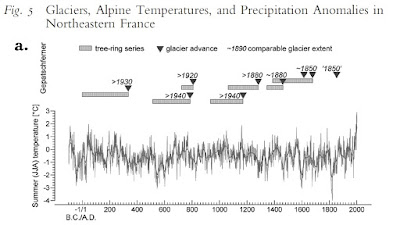 The temperature change offhandedly predicted by the NHTSA EIS, on the other hand, is closer to the lower bound of what we call the Paleocene-Eocene Thermal Maximum (PETM), which began approximately 55 million years before present. This event is tied to some fairly spectacular changes in terrestrial and marine ecosystems:

"The onset of the Paleocene–Eocene Thermal Maximum has been linked to an initial 5 °C temperature rise and to extreme changes in Earth's carbon cycle. Fossil records for many organisms show major turnovers. For example, in the marine realm, a mass extinction of benthic foraminifera, a global expansion of subtropical dinoflagellates, and an appearance of excursion, planktic foraminifera and calcareous nanofossils all occurred during the beginning stages of PETM. On land, modern mammal orders (including primates) suddenly appear in Europe and in North America. Sediment deposition changed significantly at many outcrops and in many drill cores spanning this time interval." (Wikipedia, 2018)"

I mean, we're talking about the rise of an entire ecosystem. The evolution of a small Labrador-sized forest critter into Mister Ed. The emergence of what would eventually become Mitch McConnell and other, intelligent, hominids.

A normal, intelligent-human-being response to this sort of change would be to scream and run around in circles like your pants were on fire.

I honestly have NO idea what a world 4 degrees hotter than this one would look like, but it sure as hell will be different. Wetter, certainly; most if not all the sub-polar land ice will melt, and sea levels will rise some measurable degree. Many major cities, located along the coast or in low-lying coastal plains, will have to be relocated, effectively rebuilt, or be flooded. Coastal structures of all sorts will have to be moved, or protected. Storms will become larger, and more intense, and Infrastructures will have to be hardened to protect from them. Out current global food supply system that provides bananas in the winter and lettuce year-round will have to change in ways it will be difficult to anticipate and may be impossible to sustain.

These costs in money alone will be immense.

Croplands will change; some becoming too wet, some too dry, others simply "migrating" to find climatic conditions suitable for the types of crops, and those may have to change, in some cases dramatically. Some will not be capable of such short-term adjustment, and humans may find that, for example, apples or cherries are luxury items, grown in tiny amounts and offered to a tiny, ultra-rich minority.

Huge portions of the tropics may become effectively uninhabitable, with summer temperatures rising to levels beyond which unprotected humans can reasonably work outdoors. Rainfalls will shift, with some areas getting too much, some too little. Humans will have to move towards, or away, from those areas which can no longer sustain practical agriculture, lack accessible potable water, or are just too hot, too wet, or too dry to live without heroic engineering accommodations.

This is - or should be - a national-emergency-type scenario, a WW2-level sort of national mobilization but against an "enemy" that cannot be defeated. The entire world will change in ways that are nearly impossible to predict with great confidence, other than "it's going to be a really, really big fucking change". Wars will erupt over access to water, or cropland, or DRY land. Entire populations may migrate, with all the associated horrors - Google "mfecane", if you have the stomach for it - and there's no guarantee that any particular military, or political, solution will be effective responding to those migrations. But one would think a prudent, normal intelligent human reaction would be to 1) try and do everything possible to avert the result, and 2) do what one can to anticipate and mitigate the harm if it does occur.

But we are not seeing a normal-intelligent-human-being sort of reaction to this.

The people that run the United States - and I'm not sparing the "liberals" of the Democratic Party here; if they had the sense God gave a goat they'd be running around like their hair was on fire about this - seem uninterested in this coming World War C.

And that, as much as anything else, is what this reminds me of. If you haven't yet, read Max Brooks World War Z: An Oral History of the Zombie Apocalypse First, just because it's a cracking fun read, a classic horror tale.

But mostly because of the point that it makes: that human nature hates to look brutal truths straight on. The book is full of "good people" - doctors, soldiers, politicians, scientists - who hide or deny or evade or just refuse to scream for help in the face of what is increasingly obviously a desperately terrifying future. Unlike the Trumpkins, who are simply doing this to make money before the disaster sweeps us away, they all have good reasons; they fear panic, or political collapse, or dictatorship, or being wrong, or causing a backlash. But the book makes the horrible point that, in the words of one of the characters: “Most people don't believe something can happen until it already has. That's not stupidity or weakness, that's just human nature.”

The Trumpkins are just the weapons-grade stupid endmember. The entire human race, nearly every human government, seems eager to avoid the inevitable conclusions made evident by this scientific prediction. The collective response seems to be at best a massive yawn, at worst a deliberate fingers-in-the-ears-la-la-la-I-can't-hear-you denial.

The entire business is just depressing as hell. 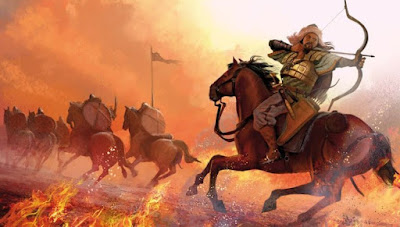 Maybe we'd respond sooner, and better, if it was Huns.