Last Saturday the 2nd was VJ Day.  I was at a luncheon and sitting next to a 93 year old veteran, quite an interesting guy.  I stayed for hours after the lunch was over to hear his sea stories.

Originally from a small valley town in the coastal range of Oregon.  He was playing football in the University of Oregon at Eugene when the war broke out.  He and several others on the team dropped out of school and enlisted in the Marines.  He and his football team buddies served with a Radio Intelligence Platoon in the Pacific.  Those platoons were one of the forerunners of National Security Agency (NSA) of today.

They had to backpack radio direction finders (the 1st generation DAG-1 model they carried weighed 100 pounds with batteries) on islands of the South Pacific.  Primary job was to locate Japanese radios and therefore possible enemy forward observers or unit headquarters.  They also carried receivers to intercept message traffic and they had Nisei Japanese-Americans with them to translate those radio calls.  There were no jeep mounts back then so everything had to be carried on their backs.  He said the Nisei with them wore USMC uniforms, but even so there was always the danger that they would be mistaken as enemy by other US units, so they had to be escorted everywhere to prevent blue-on-blue casualties. 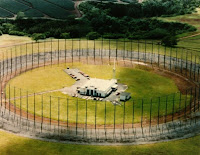 He himself was in the Marshall Islands and the Battle of Okinawa.  Prior to deployment he did his training at Wahiawa in Oahu.  Wahiawa was the main stationary direction finding center in the Pacific during the war and was still there in 97 the last time I visited Hawaii and may still be there.  Wahiawa was the station that received the IJN message traffic decoded at Pearl Harbor that led to the decisive victory at Midway.  There was little if any classroom instruction.  It was 99% on-the-job training working a shift with a salty old Navy Chief standing behind and nit-picking the trainee’s every action and giving him a sharp rap on the knuckles for any false move.
In the Marshalls, after the Battle of Kwajalein, they helped the Navy assemble a permanent DF & Intercept site there that had been dismantled on Guam just prior to the Japanese takeover.  They also worked shifts at that site until mobilized for Operation Iceberg the Okinawa invasion.  By this time he was a corporal leading a section of the radio intelligence platoon.  He had three DF sites each a mile apart set up just one ridge north of Hacksaw Ridge featured in the recent Hollywood movie.  G2 apparently forgot about resupplying them as they went without rations for ten days.  Says They scrounged empty foxholes for C-Rations that had not been opened.  Could always find unopened cans of ham&limas, which they scarfed down even though nobody liked them.   Plus he sent out a scrounger to make midnight requisitions on another unit ration dump, but they were alone and far from other units so pickings were slim.  In addition to transcripts of Japanese radio traffic they were able to triangulate on an IJA light tank platoon, which soon became scrap metal after a battery TOT mission.

After VJ day, he says Uncle Sam exercised the 'for-the-duration-plus-six-months' clause in his enlistment contract and sent him and his unit to Tientsin China.  They were being used to help accept the surrender and repatriation of Japanese troops, and also to track down units of the Kwangtung Army that did not initially surrender.  Some small Japanese units in Mongolia or other remote areas never got the word, or had refused to believe it.  So they had to find them and the Nisei interpreters in his platoon had a tough job convincing them that Emperor Hirohito had surrendered and wanted them to come home.

He mentioned Atiyeh, a Governor of Oregon in the 1980s, was also a member of his platoon.  Many guys in his platoon were former football players who dropped out of the University in Eugene to enlist for the war.  Those 1st generation backpacked DF sets were damned heavy he said, it took a big guy to carry those plus weapons and their other normal load. (Note -  I looked online and found smaller ones from that era, for instance the Austrian made ’Gurtelpeiler’ worn as a vest, but I believe it was for short range work by the SD or perhaps the Gestapo.)

After the war he settled down in Rainier, Oregon.  But retired from there 28 years ago and moved to the great state of Washington, near a golf course.  No golf carts for him though, he walked the course every day up until a few years ago, which is probably why he is still healthy at 93.  (Note to myself: do more walking)!

I neglected to mention that this particular veteran and his platoon were not the only ones sent to China after the war.  III Amphibious Corps received orders to ship out to China within forty-eight hours after the Japanese surrendered on 2 September.  There were many hundreds of thousands of Japanese and Korean soldiers and civilians in China needing repatriation.  Neither the Japanese nor the Chinese had the assets to make that happen.  So POTUS #33 directed the 7th Fleet and the 1st and 6th Marine Divisions of IIIAC to northern China with orders to accept the surrender of the Japanese and repatriate them.  And also to ”help the Nationalists reassert their control over areas previously held by the Japanese.”  IMHO this last was probably in reaction to Soviet Operation August Storm into Manchuria.  Preliminary plans had been issued in August.  Army LtGen Wedermayer was in command of the China Theater at the time and it was at his urging that the orders were issued. 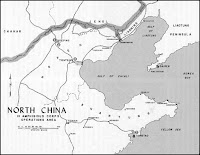 They took up positions in Peking, Tsingtao, Tangku,
and Chinwangtao in addition to Tientsin.  Protecting railroads that delivered Japanese internees, coal, and Nationalist troops was part of their tasking.  So squad and platoon size detachments went many places in between those five major cities as train guards and bridge security.  They were not to take sides in the fighting between the Reds and the Nationalists, but sh!t happens so they defended themselves.  They negotiated directly with Zhou Enlai over many of these incidents.


They provided security for US Fleet Repatriation Centers in various Chinese ports, many of which came under sporadic attacks.  They provided six-man security detachments to 39 LSTs transporting the repatriated internees home in case there was any difficulty with the ~1000 Japanese soldiers on each ship.  BTW there were no difficult incidents, the Japanese were happy to be going home.  The photo on the lower right is of Japanese soldiers on their way home saluting the Stars and Stripes upon boarding an LST returning them to their home islands.  The saluting was not forced on them by the US, they did it at the order of General Nagano, former Commander of Japanese troops at Tsingtao.  And they were probably happy to not have been in Manchuria ‘repatriated’ by Stalin to the Siberian Gulag or to the forced-labor Karaganda coalfields of Kazakhstan  -  or

happy to not have been the victims of mob violence inspired by local guerilla political cadre.  Altogether ”more than 540,000 Japanese had been repatriated from North China under Marine supervision”.  Another 1.7 million were repatriated later by NGOs working with the Japanese Merchant Marine, whose shipping was 99% comprised of US Liberty Ships, LSTs, and Hospital Ships.

The 93 year old who I got the story from was released in late 1946.  He went back to University at Eugene, married his high school sweetheart, and raised two doctors, a schoolteacher, and a fourth he describes as the mellow child happily living in a jackrabbit paradise.