I hate to even admit this.

I'm not TOTALLY hating on the totally-expected roundup-the-wetbacks directive from the new Administration.

Bear with me for a moment, though.

Now. Don't get me wrong. This thing will suck for millions of people whose crime is trying to get a piece of the American Dream for themselves and their families. I hate that on a purely personal, I-don't-like-to-make-things-suck-for-innocent-people level. As a person, I hate it.

As a citizen, as someone who thinks about politics and governing...well, let's start with this; to be a stateless person, a non-citizen, in a foreign nation is not a good thing.

It's not good for the person, who has no civil rights, who is outside the protection of the civil law, and who is, therefore, hideously vulnerable to all sorts of malefactors.

And it's not good for the nation, that has this indigestible mass of non-citizens within it prey to crime and violence, exploited by employers and living in fear of taking part in the civil life of the community.

So. The bottom line really is; if you are a citizen of Mexico, or Ireland, or Bali...you belong in Mexico, Ireland, or Bali unless you are a legal resident or visitor of where-ever-it-is-you-are; in this case, the United States.

(In case you're interested, I wrote a loooooong post over at my other joint three years ago where I discussed what I see as the vast, almost insoluble complexity of this problem, which concluded with the following:

"The real issue - the one Which Dare Not Speak Its Name - is that the institutional poverty, misgovernance, and social maladjustment of most Latin American countries is so profound and so destructive that to address it would take every penny that the U.S. has spent on poorly planned foreign adventures and more. Much more.

So instead we get this idiotic argument that all we need to do is fence these little heatherns out and everything will be Good. God will once again be White and in His Heaven, the food will magically get harvested, processed, cooked and served by "Real Amurikans" (that is, legal citizens) who will suddenly, magically, want to work for the pittance we want to pay for these jobs to prevent our food, clothing and service costs from reflecting what it would cost to pay humans actually living wages to do these things."

But this post isn't about those things; it's about the Trump-promising-to-deport-the-beaners-and-going-ahead-and-doing-it.)

As opposed to the ban-the-raghead rule, which really was poorly thought out and complete geopolitical foolery, the idea that the United States should police its borders and return those who have entered the country illegally to their homelands is not, on its face, as freakishly boneheaded as most Trump stuff.

Here's the problems I DO have with this.

First, I can see a gajillion ways that this is going to be a fucking total shitshow. American citizens will be grabbed up and deported by mistake. Sweeps will result in a seething mob of people shoved into FEMA trailers without any sort of organization or preparation. Screening will be a disaster. The optics - "jackbooted ICE agents handcuff adorable tiny Latino kiddies" - will make the Land of the Free look like the Land of the Assholes. People will get stranded in Mexico City airport with nowhere to go and no hope of relief.

I can see about a dozen ways this will be a smoking crater - it's Trump, for one thing, who seems to have a gift for employing people who couldn't run a child's birthday party - that will make the Iraq War look like VE Day.

Second, I can also see how this could turn into something far nastier and far worse, along the lines of the Japanese internment of 1942. There's always been a hell of a strong strain of race hate and xenophobia in America (as there is in about...well, pretty much everywhere humans live...) that could take this from a calmly conducted law enforcement process into a screaming ratissage against every person or group of people that every whacko wingnut hates and freaks out over (Hello? Alex Jones? Hello?).

And, finally, I think that, even if this isn't a dumpster fire, that the results will be at best underwhelming. The promised Day of Alien-Free Jubilee will turn out to be a quiet monotone of unpicked crops, uncleaned hotel rooms, unwiped asses, and uncooked meals.

The result of all this huge slug of spending - surely paid for by a tax hike, right? - will be, outside of personal hardship for those involved, a vast expanse of...very little. 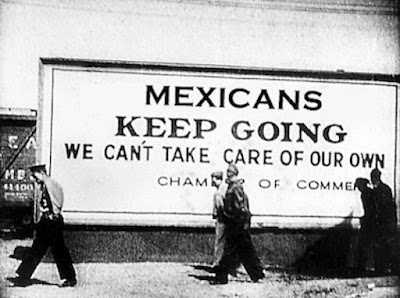 What do you think?
Posted by FDChief at 5:30 PM