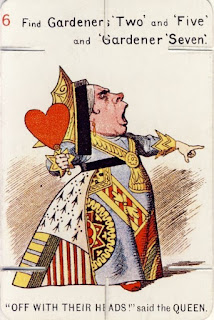 And we'll never be royals
It don't run in our blood
That kind of lux just ain't for us,
we crave a different kind of buzz
--Royals, Lorde

Then with the boiler about to explode
from eight years of blather and neglect,
Humphery's cold-war liberals could have
fled down the ratlines and left the disaster
to whoever inherited it
--The Great Shark Hunt,
Hunter S. Thompson


After a year of malignant hauteur vis-a-vis candidate Trump the talking heads ask in play-befuddlement of the Republican Presidential candidate: “How did HE happen?”

In their arrogance, the press created a simplistic constituent of angry and bigoted American bumpkins wielding pitchforks across the land who supposedly comprise the majority of Trump’s supporters.  Presumably feeble-minded and easily suckered, their sad domain is the “flyover states”.

Surely fools all, they will fall in embarrassment when we knock their candidate around a bit. Surely he cannot stand up to a "real" candidate, like Mrs. Clinton -- "real" today meaning a lawyer, someone who has earned his bona fides by treading the muck of Foggy Bottom.

That is the sort you may vote for, because, well, they are practiced in the sleazy craft of treading muck, and politics is a dirty business. Not for the likes of you and I. It is heresy to think it might be otherwise . . . and yet, here it is.

The press would have you think the poor sots who think otherwise are the people candidate Obama disdained in 2008 as the “guns and Religion crowd”. (Ironically, then-candidate Clinton called Mr. Obama, "elitist and out of touch" for his disdain.) And those who would feign shock at Mr. Trump’s success?

They would do well to look to Mr. Obama for the germ of candidate Trump's success.

At a 2011 White House Correspondents’ Association Press Dinner, President Obama slapped candidate Trump down in front of a televised world audience. Lauded as "cool" by the cognoscenti, it was actually an evisceration.

President Obama did not deliver his remarks in the spirit of peer-to-peer bonhomie which such occasions demand. Obama dismissed Mr. Trump in his entirety.

It seemed Mr. Obama (to paraphrase the man's own words) held "antipathy to folks who aren't like him."

This additional moment of un-Presidential hubris consolidated the phenomenon that would deny the nomination to 16 party-sponsored GOP candidates. Trump was supposed to be the provocateur; he was not a favored party son.

So what else has enabled Mr. Trump’s very credible bid for the White House -- aside from the very real sense of deracination among a large contingent of U.S. citizens?

Hatred bit the Good Liberals on the ass. Personal animosity has no place in national discourse, yet the press's covered has been deeply personal and mean-spirited, often malicious and contemptible. (How someone who produces such grotesque hatred as a Charles Pierce can sleep at night mystifies.)

Further, the attacks have been relentless, fairly toothless, and a sort of “vile fatigue” has set in for many who resent their arms being twisted into voting for what they are told is the only one viable candidate.

Much as bombs and terrorist attacks have become background noise to our daily life, so the single-minded disdain of Mr. Trump is a simmering constant in the media. For a thinking person, this enforced press agenda rankles.

The harridans of the press may talk good, but their bought-and-paid for agenda is transparent to a disillusioned populace. The only ones who follow the bait without suspicion are those inclined to believe as they do a priori – the Party Men.

The President (a haughty skinny Boss Tweed), Mrs. Obama (an angry disparaging one) and Joe Biden (who does what he’s told) have joined in swinging at the Trump piñata on candidate Clinton’s behalf. None convince because we know they have not done what they said they would. The “hopey-changy” thing lies lifeless, like roadkill on the MSR.

And in a sense, perhaps the essential difference between the candidates is expressed in Mr. Clinton’s demeanor: Mr. Trump exudes an enthusiasm born of his success. Contrast that with Mrs. Clinton’s sour, entitled didacticism.

Who feels more like America 2016? Mrs. Clinton, the 1910 school marm hypocritically dispensing recitations from her McGuffey reader ("Do as I say, not as I do"), or Donald Trump, the reality show Boss in a world lived in the simulacra of the hyperreal. You decide.

We are 14 years into a war that leads nowhere, and bodes no good for the U.S. (aside from padding the pockets of military contractors.)

The U.S. supports Iraqi militias and calls them an Army. It fights and Army (ISIS) and calls them terrorists. Our foreign policy understands only war – its continuance and expansion.

Is it any wonder the people want something different?