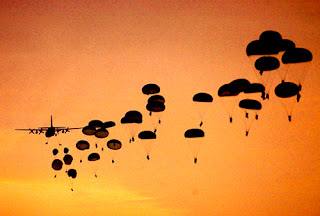 The annual meeting of Airborne Instructors, past and present, will take place in Columbus, Georgia on October 2nd and 3rd. Historically, the group meets the first Friday and Saturday in October. Informally they call themselves "The Old Airborne Instructors Group," but the meetings draw a mixed bag. This is truly an historic gathering.

Friday night is a cash bar at 17:30 hours, and Saturday is a covered dish lunch, 11:30 until 1300 hours; bring a dish or dessert to share. Both events take place at the American Legion, 3361 North Lumpkin Road. Attire is casual.

All former instructors and former students are invited. Last year a 94 year-old trooper attended, and World War II instructors have also attended. The Triple Nickels (555th Parachute Infantry Battalion), the first all-black Airborne Battalion in WW II, are also well-represented. They are as historic as the Tuskegee Airmen, though less well-known to the general public.

Hope to see you there.